The title race is won as United sets a new record

The race is over, a historic record title has been won and it was all down to one man. If the question is asked as to whether Manchester United could have done it without Sir Alex Ferguson the emphatic answer will be a loud ‘NO’. It’s therefore only right for him to have the last word.

The race is over, a historic record title has been won and it was all down to one man. If the question is asked as to whether Manchester United could have done it without Sir Alex Ferguson the emphatic answer will be a loud ‘NO’. It’s therefore only right for him to have the last word. “It was a fantastic performance by the lads and the supporters and for everybody connected with the club it’s a great day today” he told Sky Sports. “The players worked their socks off to get the result we needed. It wasn’t an easy game, we went 1-0 down having given them a bad goal but we kept on and we don’t give in. It looked like it was not going to be our day, we’ve always had it difficult here. It is a local derby and they are fighting for their lives looking for that point, but we kept going and that’s a good quality.”

“It’s a bonus for us, now we can consider who should be rested and who should not be rested” he added “I know there is all this talk about what our team will be next week but, in fairness to all the clubs, we’ll be fair, don’t worry about that, we’ll go out to win that game. It’s not easy this league” he remarked “we’ve dropped points to Blackburn, West Brom, Birmingham, Aston Villa, Sunderland, Bolton and Newcastle. That’s an indication of how tough the league is.”

He added “It was a big challenge, in the 80s it was Liverpool’s time. When I came down, I never thought we could achieve what we’ve achieved, but getting that first one in 1993 opened the doors. The success has carried on and in fairness to the club, all the players who come here know they have to win.” One look at the bulging trophy room at Old Trafford ahows that they have done exactly that. 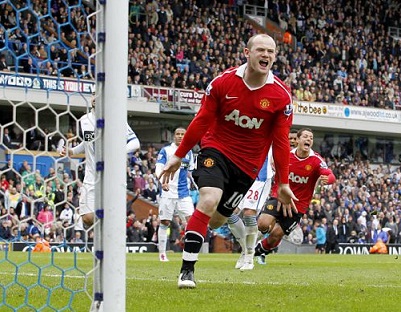 The Telegraph – Wayne Rooney secured Manchester United’s 19th domestic championship with a controversial penalty against Blackburn that leaves the Ewood Park club facing a final-day battle to avoid relegation from the Premier League. The point that United required to confirm the title came courtesy of Rooney’s 70th minute spot-kick, which was only awarded following a lengthy discussion between referee Phil Dowd and his assistant, Andy Halliday, following a foul by goalkeeper Paul Robinson and Javier Hernandez.

But although United now move ahead of Liverpool in terms of titles won, they stumbled over the line after Blackburn, given the lead by Brett Emerton, took the lead and proceeded to carve out the better chances. Last Sunday’s 2-1 victory against Chelsea at Old Trafford had moved United six points clear of Carlo Ancelotti’s team and left Ferguson’s players with the seemingly routine task of collecting a point from their final two games to clinch the title Full Report

Click Lancashire – The Darwen End at Blackburn Rovers was given up entirely to the Manchester United hordes whose cacophonous support could well have been heard back in Piccadilly Gardens. They came expecting their side to wrap up the league title for a record 19th time. United only required a draw, but faced a Rovers side still in need of points to safeguard their Premier League status.

They ultimately garnered the point, but only after the sternest of tests from a gallant Rovers side and a moment of controversy twenty minutes from the end. Javier Hernandez was adjudged to have been brought down by keeper Paul Robinson in the box and Wayne Rooney struck home the equalising spot-kick which took the title back to Old Trafford Full Report

Manchester Evening News – Manchester United secured a record-breaking 19th league title at Ewood Park – but the Reds did it the hard way against Blackburn. United goalkeeper Tomasz Kuszczak endured a nervy opening half, and uncertain play from the Pole led to Blackburn opening the scoring through Brett Emerton. The Reds hit back when, after goalkeeper Paul Robinson had fouled Javier Hernandez in the box, Wayne Rooney lashed home from the spot to seal the title.

United have now officially overtaken Liverpool’s record of 18 titles. Being behind at half time was not in the script. The Reds had played with the confidence of a team who felt they were about to become champions, stroking the ball around efficiently and creating plenty of space around the Rovers box Full Report

Was this the most satisfying title United ever won?