19 is done and dusted, now for the United Youth

Football’s increasingly global nature means Manchester United will approach the FA Youth Cup final with Sheffield United pledging to continue their worldwide search for talent. The likelihood is Paul McGuinness’ side for Tuesday’s first-leg duel at Bramall Lane will include representatives from Italy, Holland and France. Spanish World Cup winner Gerard Pique appeared in the competition for United in recent years, as did Giuseppe Rossi and Federico Macheda. And, given the glory Lionel Messi has helped Barcelona enjoy since arriving in Catalonia as a 13 year old, it is clear operating purely within the boundaries of Greater Manchester is not an option.

“It is a global game now” said United academy director Brian McClair, the former Scotland striker. “You only have to look at the number of people in the first team and where they come from. When I first came down to England, if someone had told me what was going to happen, I would have said ‘No chance’.” 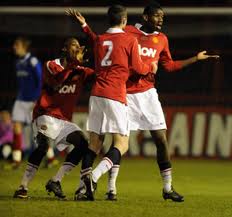 That Pique and Rossi have gone on to enjoy success in the Primera Division raises the question of whether the strategy does pay dividends. Italian Macheda is another who appears destined to return home without realising his potential with the Reds. However, McClair feels the benefits are twofold.

The most obvious is that you could unearth a rare talent which would save you millions in transfer fees. But of equal importance is the knowledge that the arrival of someone like Paul Pogba, the young United team’s driving force in midfield, can present a challenge to established players that triggers further improvement.

“Everybody at Manchester United has always appreciated and wanted local boys to come through” McClair admitted  “We are picking up boys from the age of seven and in the second leg of our semi-final with Chelsea, there were seven players who had been with us for 10 years. That is the most pleasurable part of the job. Those lads will challenge each other up to a certain level but we have to be on the lookout for one or two more. Ryan Tunnicliffe has had a really good season. Is that because Paul Pogba is here?” he asked.

United are favourites to secure a record 10th Youth Cup against a Blades outfit who have never previously reached the final. This is what the young Reds are up against

Good luck lads, just like the ‘Class of  ’92’ were in the past,  you are now the future of a great club