Hungarian to take charge of United and Barca

A Hungarian official who is younger than some of the Manchester United veterans has been awarded the honour of refereeing the European Champions League final against Barcelona at Wembley.

A Hungarian official who is younger than some of the Manchester United veterans has been awarded the honour of refereeing the European Champions League final against  Barcelona at Wembley. Viktor Kassai refereed the World Cup semi final between Spain and Germany and was in charge of United in the Champions League against Spanish opponents Valencia earlier this season. At just 35 years of age Kassai is younger than United stars Edwin van der Sar 40, Ryan Giggs 37 and Paul Scholes at 36.

There should be plenty of reasons for United fans to be happy with Kassai’s appointment. He was in charge of United’s 1-0 defeat of Valencia in the group stages at the Mestalla where a  late Javier Hernandez strike won the game and not a single United player was booked. 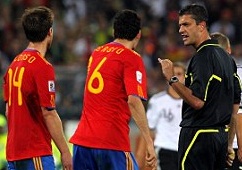 Known for his leniency and willingness to let the game flow, Kassai has not flashed any red cards in his four Champions League games this season. The Hungarian who is fluent in English and German – but not Spanish, was also in charge of England’s 4-0 Euro 2012 qualifying win over Bulgaria in September where there were no bookings for England players during his first game at Wembley.

Kassai has issued 19 yellow cards in the Champions League this season, an average of less than five per game. And of his 14 yellows issued during games involving English teams, eight have gone to Premier League clubs. The Hungarian, who has been refereeing since 1996, made his international debut in 2001 and has been in charge of more than 60 UEFA matches in his career.

He has refereed a Spain side featuring Barcelona stars Gerard Pique, Carles Puyol, David Villa, Xavi, Pedro and Andres Iniesta which beat Germany 1-0 in Durban to reach the 2010 World Cup final and did not book a single player in the game.

Does it really matter where the referee comes from?