The now almost certain signing of 20 year old Athletico Madrid goalkeeper David de Gea leaves me with a distinctly uncomfortable feeling. Despite all the faith I have in Sir Alex Fergusons decisions, the thought of a youngster who cannot yet vote in an election or even legally have a drink in many countries, replacing a legend twice his age does not sit well.

For all de Gea’s undoubted potential, my major concern is that of retaining the Premier League title in 2011-12 rather than in four or five years from now. But then I may be totally wrong as I’m not even close to having earned the right to question Sir Alex. 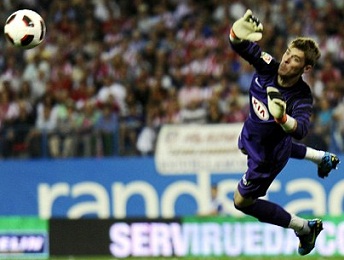 Former Manchester United goalkeeper Roy Carroll has warned de Gea to expect a “lot of pressure on his shoulders” when he arrives at Old Trafford. Carroll was in and out of the side during a four year stint at United between 2001 and 2005 and the former Northern Ireland international said de Gea, for all his experience elsewhere, would be under the spotlight as never before.

“Edwin van der Sar has done really well for United over the last few years and this young ‘keeper is coming to the biggest club in the world – he’s got a lot of pressure on his shoulders” Carroll told talkSPORT.

“Manchester United is the sort of club that want to win every trophy and the pressure of playing for them is huge. £18 million is a lot of money to pay for a 20 year old ‘keeper but Ferguson knows what he’s doing and I think in the last couple of years de Gea has proved how good he is in the Spanish league” Carroll admitted

“He’s played a lot of games there as well as in the European Under 21 Championship. I think Sir Alex will have been watching him for quite a while and I’m looking forward to seeing him play in the Premier League.”

My fervent wish is to be sitting here 12 months from now saying what a masterstroke it was for Ferguson to bring the lad to Old Trafford – just as we are all now blessing the day that Hernandez was convinced to sign for United. For now, all my fingers are admittedly tightly crossed.

5 thoughts on “Fingers crossed de Gea is the answer”