Kiko returns home – but will he make the grade?

For a youngster, England is a better place to play. It wasn’t easy from a psychological point of view to leave United and join a Sampdoria side who were fighting relegation

Federico Macheda has vowed to learn from the experience of a disappointing loan spell with Sampdoria as he prepares to rejoin the United squad. The 19 year old striker opted for a temporary return to his native Italy in January instead of going on loan to a top flight English club but the Genoa side’s relegation scrap meant he was used sparingly as the club ultimately failed to avoid the drop from Serie A.

“I really wanted to have an experience in Italy” Macheda admitted to Sky Sport Italia “but I now hope to stay in the Premier League. For a youngster, England is a better place to play. It wasn’t easy from a psychological point of view to leave United and join a Sampdoria side who were fighting relegation. It was a delicate situation.” 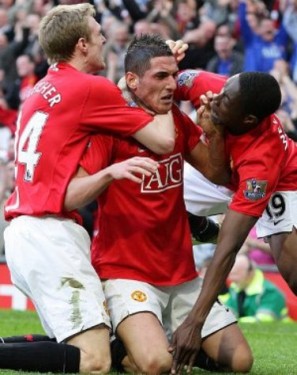 Speaking recently to ManUtd.com, reserves boss Warren Joyce stressed the need for Macheda to take the positives from the stint away from Old Trafford “Sometimes you learn about yourself even when things don’t go well”  he explained “Federico’s had to dig deep. I know it’s his home country but he’s been away from Manchester and things have not gone particularly well for him. He’s had to look at himself and time will tell.”

“We only had one real meeting out there in Italy, but I’ve had regular dialogue with him on the phone and he sounds up for the challenge. He might have learned from this bad experience. It’s now all about how he comes back to United and responds to the challenge.”

Kiko who is under contract with United until June 2013 failed to score in 14  Serie A appearances for the Genoa outfit. “I arrived in Genoa with great enthusiasm” Macheda said “the first few games the team and I did very well but after the defeat to Napoli, I did not find continuity.”

The youngster had no hesitation in giving his views on the cross town rivalry with Manchester City telling Italian reporters that  “they will always be one step behind United. Roberto Mancini is doing well in charge of City” he conceded “the rivalry is very strong but we are always one step ahead” smiled Macheda. “They are doing well in the transfer market, Mancini won the FA Cup and could do even better next season. Sometimes I see Mario Balotelli at the same restaurant but we don’t go out together.”

Rightly or wrongly, I have always seen similarities between Macheda and former Italy international Christian Vieri. Remember that the former Azzurri World Cup striker never made his mark until moving to Juventus at the older age of 23. What do you think…

Can Macheda eventually develop into another prolific goalscorer like Vieri?

Written by Frank Scicluna
8 comments
Red Dead Podcast 4 – Who's In, Who's Out, United Stadium and "Super Fans"
Giggs is a mere footballer NOT a moral crusader