Sir Alex Ferguson has been labelled ‘Sir Pinocchio’  by Sky Sports Italia. “He does not tell the truth all the time, especially when it comes to buying or selling players” it warned its readers. So what can we make of Ferguson’s insistence that Dimitar Berbatov is over the disappointment of being left out of the Champions League final squad? The Bulgarian was joint top scorer in last season’s Premier League but failed to make the bench at Wembley with Michael Owen preferred after the manager agonised over his selection. The omission led to inevitable speculation in the press that the former Spurs striker would be leaving Old Trafford this summer but the manager insists there are no issues to resolve.

“Dimitar is fine” explained Sir Alex to PA Sport. “There is no problem. He has trained very hard. He was disappointed to be left out of the final but I was disappointed myself having to tell him. But that is the problem in football today. You get to the big games and you are not just disappointing one player, you are disappointing six or seven.” 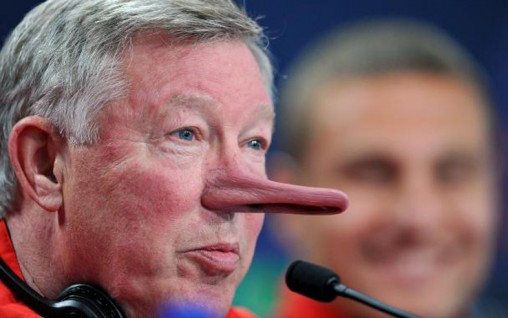 Ferguson has his own frustration from the final in May to get out of his system as he admits that the Catalans have set the benchmark that United must reach. “Barcelona are the team of the moment” he conceded “it is a cycle. They can dominate any game and could have probably done that to any other team.”

“But it is not the kind of thing that makes you think ‘let’s not bother with European football any more, we are never going to beatBarcelona’. Manchester United are bigger than that. We have a better philosophy than that. The challenge will be can we improve enough to get to the final next season – and win. I view it as an evolution. A new team is emerging.”

“We have 12 players aged 22 and under. We have lost five players in their 30s. Javier Hernandez will improve. Wayne Rooney has come into his mid-20s, we expect big things there. They should be hungry to try and match the achievements of the others. If we get to the cup final next year, maybe it will be a different United.”

Can United fans completely believe what ‘Sir Pinnochio’ is publicly saying about the Berbatov situation? We will know at the end of August when the summer transfer window slams shut.