Does anyone remember the days when pre season training was described as ‘torture without seeing a ball?’ Have a look at a photo of Sir Matt Busby below – with what seems to be his ever present pipe, at a sixties pre season training session with not a football in sight! How things have changed! It’s now all about sports science and technology rather than endless running over sand dunes and steep hills. First team fitness coach Tony Strudwick sits down with manutd.com‘s Nick Coppack to explain why.

Tony, what went on back at Carrington before the team flew out to America? We have a structure here where the first two days back are pretty much screening and testing. Much of that is to establish where the players are at and where their weaknesses lie. There are more functional screens and medical screens with Dr Steve McNally. We need to know where the players are at and what their priorities are to get them right for the first game of the season in August. 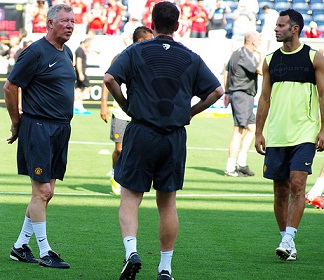 Beyond that, we’ve pretty much gone into the football really early this year. Other years, we’ve had a little bit longer. But the first game against New England Revolution was nine days in, so the priority in the first week was to expose the players back to football and integrate that with the levels of conditioning. Much of the conditioning work is completed within a football environment. The classic pre-season of running up hills and running for eight miles is out of the window. Now it’s all about base work in a football environment.

Friendly games don’t matter so much to fans but the pre season tour is massively important to you, right? The way we look at pre season games is that we want them to give us every opportunity to get it right for the first game at West Brom. Consequently, the players need to be in the right frame of mind. What you saw in Boston was some players getting 45 minutes but because we only had 17 outfield players most of our Under 21 are linking up in Seattle, three players had to play 90 minutes.

We had to identify the players we felt could cope with that 90 minutes so soon after coming back from holiday. Before West Brom on the first day of the season, we’ll be looking at the appropriate exposure rates for each player on the in terms of game time and we build that up gradually until we hit the Community Shield. Then we’ll give whoever needs it 90 minutes at Wembley so they’re in top shape forWest Brom.

When do you want the players to hit their peak? Ideally, we have to hit peak on day one of the season atWest Brom. In realistic terms, some of the players won’t hit peak until the back end of September, believe it or not. It’s just the way individuals react and it’s down to the manager to establish where he feels players are at and adjust his starting XI accordingly. But, typically, some of the older guys get up to speed pretty quickly because they’ve got training exposure behind them and don’t lose a lot in the off season.

Generally, they’ve got less of a margin to make up. Remember Paul Scholes last year – he started brilliantly with his performances in the Community Shield and the first day against Newcastlewhen he was man of the match. So you see that different players are all individuals and react differently so it’s up to us to identify what their needs are and that’s where the details change. Going back 10 to 15 years, fitness preparation was at team level. Now it’s so individualised and bespoke. Even when we do gym sessions we have a generic structure put in place but, in and around that, we’ve got different individuals doing different things. It’s why we need the level of staff we’ve got. We can’t have attention to detail with just one or two key members of staff. 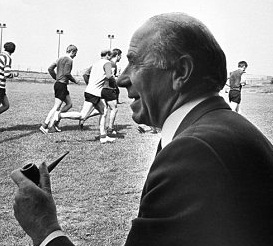 Is that the difference between United and lower division clubs? I think so. I would guess it’s the detail and the resources. The manager has been fantastic in growing this sports science department and it’s really well supported by David Gill, who has a vision going forward – not just building a sports science department now but one for the future.

There’s a long term plan and a new facility, an extension at Carrington so, from the sports science point of view, the club has been fantastic. We have to do that in the modern game though or else we’ll get left behind. Pre season is an important period for us, an important time for the strength team and sports science team but it’s an annual programme. It’s not like we bring in a fitness team for pre season and then, in six to 10 weeks, get rid of them when you start playing football.

It’s an ongoing thing now, although I must admit that pre season is the most enjoyable time for me. There’s not the intensity in the results of the games – it’s about physical preparation and it’s a priority from our department’s point of view. We like that responsibility, it’s challenging for us and enjoyable.

You have a lot of technology at your disposal. What, exactly, do you measure and monitor? We can monitor pretty much everything. Sleep patterns, every run, sprint, spike in performance. We have the capacity at Carrington to do blood analysis, saliva analysis and it can go as scientific or in depth as you like. The big decisions for us to make now are around that data and deciding what’s actually important and what are the important markers to compare ourselves to.

By and large, we’ve bought into heart rate technology and GPS technology a lot. We feel we have a good understanding of that and have got the computer systems in place at Carrington now to make the most of that. We’ve also invested in a system that monitors where players are at in terms of daily wellness.

Are the players into the scientific side of things? Athletes are generally interested in performance and measuring themselves against others and themselves. They are definitely interested and it’s part of an ongoing education system. The long term vision will be almost like a triage system where players come in the morning, we screen them and identify any risk to their health and performance, they go onto another test on the iPad to tell us how they’re feeling and then onto in depth saliva and blood markers.

That’s where we are at and Dr. Steve McNally has been a big part of that and it’s changed the working day for the average footballer. There’s now a lot more monitoring and preparation, more gym work than in the past, and that’s where we feel the game is going. We have to be on top of it. Players have an expectation now when they come to Manchester United.

There’s an expectation when players come from other clubs who have got good systems in place that we will provide at least the same level of analysis and detail. We hope to do that – the best players demand the best service and of course, deserve it. We’ve got to step up to the plate and do that.

Fine margins can have a big impact in football. Is it as simple as saying, ‘If we can increase a player’s vertical jump by one centimetre, it can make a difference between a goal being scored or not?’ Definitely, and the modernisation process was epitomised last year with Javier Hernandez. There was a terrific recruitment drive and scouting process in place around his transfer and a lot of monitoring went on when he arrived. He came in and we identified where he was at and what needed work.

The testing strategies meant a lot of work then went in to developing the player to play in the Premier League, to cope with the rigours of the Premier League. You have to remember, the English game is different from what a lot of players are used to. It’s a very unique league, physically demanding and we need to do all we can to support the players and give them every chance of performing well on a Saturday afternoon.

The work with Javier seems to suggest your techniques are working  Head of strength and conditioning Gary Walker did an immense amount of work with Javier last year and Gary has got his priorities this year with the new signings. Those guys are major priorities for the sports science team. There’s a new goalkeeper of course, and he’s going to be working a lot with goalkeeper coach Eric Steele. We’ve got to match the athlete with the demands that are going to be placed upon him and that’s what sports science is all about.

The one down side from a player’s point of view with all these advancements is that they can’t hide during pre season! No, they can’t. We’re very fortunate with the players here though. By and large, they all work very hard and wouldn’t have got to this level without exceptional ability a good level of professionalism. At other clubs you maybe get one but don’t get the other.

I have to say that everybody has shown good focus in the last two weeks since returning from their summer breaks. In some ways it’s felt a lot smoother than last season when we didn’t have the World Cup players and one or two others were injured – Michael Owen, Rio Ferdinand, Michael Carrick… This year, things are looking good.

If things are already ‘looking good’ it must send an ominous warning to all of United’s rivals!