Charles Buchan’s Football Monthly was Britain’s first ever football ‘glossy’. Packed with hand tinted photographs and celebrity articles, its arrival on the bookstands in September 1951 brought colour and glamour to the nation’s football hungry public after years of wartime deprivation and austerity. At its peak in the late 1960s the magazine was selling 254,000 copies. Charles Buchan’s Manchester United Gift Book: Selections from Football Monthly 1951-73 is a 144 page hardback published by Malavan Media in October 2007 which is full of wonderful nostalgia for anyone around my age. 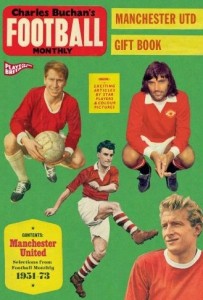 After an introduction by Simon Inglis, Manchester United historian Mark Wylie sets the scene. Old Trafford lies in ruins after the war, United are renting their neighbour’s ground, and they have a young, untried Scottish manager, Matt Busby, who was soon to sign the Dudley wonder kid, Duncan Edwards.

As the years go by the hairstyles change, the stars emerge – Edwards, Roger Byrne, Tommy Taylor, all to die so tragically at Munich in 1958, Bobby Charlton, Denis Law, Nobby Stiles, George Best… triumph and tragedy in Europe, losing Cup Finalists in 1957 and 1958, winners at last in 1963. From the Busby Babes to European Champions in 1968, Charles Buchan’s Football Monthly spanned almost the entire Busby era, watching the legend grow. The book also reprints for the first time since 1958 the magazine’s poignant post Munich tribute.

Inglis has many titles to his name. ‘Engineering Archie’ was runner up for the William Hill Sportsbook of the Year Award in 2005. His earlier book, The Football Grounds of Great Britain was selected by the Guardian’s Frank Keating as the best sports books of the 20th century.

This is a wonderful book to have on your bookshelf.