Did Nasri become a whore by snubbing United?

Let’s call a spade a spade, maybe all footballers are prostitutes! Tottenham Hotspur manager Harry Redknapp was prepared to reveal that Samir Nasri could have – and wanted to – join Manchester United but instead went to City for the money! The always blunt Redknapp was quoted on Saturdays SportingReview.com as saying that “Nasri could have gone to United. They wanted him and he wanted to go to Old Trafford. But then City came in and offered him more money so he went to them instead. United are still the biggest team in England. City haven’t got the tradition of United, Arsenal or Liverpool.”

The People then reported on the same day that Nasri was SNUBBED by United – after he reneged on an initial promise to sign for them. “Nasri went cap in hand back to Old Trafford when he feared his £24m move to the Etihad was about to collapse due to a dispute over agent fees” it wrote “but furious United chiefs slammed the door in the Frenchman’s face despite him making a ­personal plea to revive the deal with the champions.” 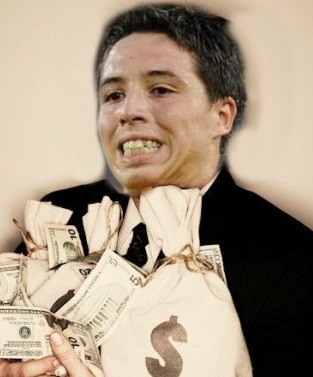 “People Sport has been told the full bombshell details of Nasri’s negotiations with both Manchester clubs – as the Frenchman prepares to make his City debut at Tottenham” it continued “we have learned that the midfielder personally agreed a £7m-a-year deal with Sir Alex Ferguson. We can reveal Nasri is being paid almost £40,000-a-week MORE at City than he would have earned at United, making a mockery of the player’s claim that his move from Arsenal was for football, rather than financial, reasons.

Fergie and Nasri met in Paris during the summer with the player’s representatives in tow and after a deal was thrashed out the player confirmed he was thrilled at the prospect of becoming a United player. The transfer stalled – and later collapsed altogether – when Nasri’s agents insisted on a massive £4m tax-free as their cut. United refused to cough up the cash, leaving the way clear for moneybags City to make a more lucrative, £9m-a-year offer.

Nasri quickly agreed the terms but then, remarkably, his switch to the Etihad Stadium also came close to falling through over his agents’ demands. City were reluctant to pay up and it was at that point that Nasri himself contacted United and tried to reignite his move there. But the Old Trafford ­hierarchy, furious at the player’s change of heart, were having none of it.

Unimpressed by Nasri’s agents’ behaviour and the ­player’s ­willingness to chase more money from City, they told him in no uncertain terms that they were not interested. That left Nasri in limbo and he turned out for Arsenal in their 2-0 home defeat by Liverpool eight days ago. Only when City later agreed to meet the agents’ demands was Nasri able to complete his move north.” The People concluded.

Football reports must always be taken with a large grain of salt but IF these have any truth in them, City – or any other serious club, are more than welcome to this money obsessed football whore AND his advisors.

Do you think that ALL footballers have become prostitutes?