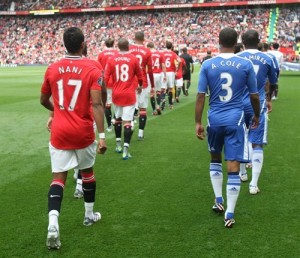 A day has gone by, 24 hours has lapsed and I have not got my mind around the big game last night (Singapore time zone) against Chelsea. What kind of a game was that? How can anyone properly describe that game? I am not sure whether to feel happy and proud at the result and the start we have made this season or to be disappointed with the performance and the chances missed. To sum it up perfectly, you can say I am left with mixed feelings even after 24 hours of the game. United players and the manager are already preparing for the Carling Cup match against old rivals, Leeds United but my thoughts are still with the Chelsea match. By the way, while you read this article I request you to accompany it with some mysterious sounding music ala the kind of background music from an Alfred Hitchcock movie because it is best for summing up the post-match feeling.

I have never seen a weirder or stranger match in my life. NEVER! United were leading in the first half by 3-0. If I had missed the first half and I had just seen the score, I would have been absolutely delighted with the score line which suggested that United totally dominated over one of our closest rivals for the title, Chelsea but that was far from the case. We got the first goal out of the blue (pun intended) and somewhat against the run of the play and were a little lucky as Smalling looked marginally offside. However we have to be thankful for the lack of marking by Chelsea to allow us to score. Chelsea, at one stage, had 55% of the possession at Old Trafford. How many times have we seen an opposition side dominate possession over United? They had more attempts at goal and were more threatening and it looked odds on that they would equalise when Torres got the ball in the clear and squared it for either Ramires or Sturridge to tap into the goal. Ramires got there first and somehow De Gea stretched to keep it out. What a miraculous save! Before that chance, Torres was presented with the ball by Anderson close to the box and thankfully, he scuffed it wide with Evans and Anderson closing in on him.

Nani got the second by skipping past a weak challenge to rifle in an unstoppable shot and Rooney got the third after a lung-busting run from defence by Jones which was halted by Terry but his clearance ricochet off Nani to fall nicely for Rooney to tap in the third. What makes the first half stranger was that Chelsea had more attempts at goal, 12 compared to United’s 5 which showed the level of dominance of the away side. When was the last time we saw such dominance by a visiting side? On the plus side, United were ruthless and clinical in front of the goal; out of the 5 attempts, 3 were scored. United, I felt, contributed to Chelsea’s dominance by being careless in possession, repeatedly giving the ball away and seemingly in a rush to attack.

If you thought the first half was strange, the events of the second half brought the strange quotient to a new level; perhaps at an all-time high at Old Trafford. Torres pulled a goal back that we grudgingly should acknowledge as a well-taken, good goal. What followed will remain in our memories beyond this season. United got a penalty on the counter-attack, a penalty that perhaps some referees wouldn’t have given. Up stepped Rooney with all the expectations of the Old Trafford faithful and beyond of a fourth goal and what happens next? Rooney does an impression of his England colleague, John Terry as he slipped and missed a penalty. 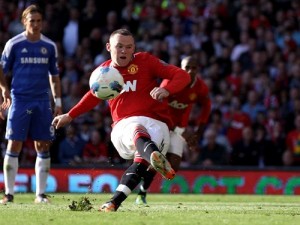 Thankfully for us, this penalty miss wasn’t as significant as Terry’s. Rooney followed on, perhaps with the penalty miss in mind, to then scuff a chance in the penalty box which trickled and hit the post. He’s human after all! Then came the moment talked about all around the world and will be repeated in weeks, months and years to come. Torres was put through, he rounded De Gea, we feared the worst, surely 3-2 now and a nail-biting end……NO! He puts it wide when it was easier to score. We rejoiced, laughed and ridiculed the man in his moment of shame.

Heartless? Perhaps but it comes with the territory of being an ex-Liverpudlian. I do have a little sympathy for the man though. 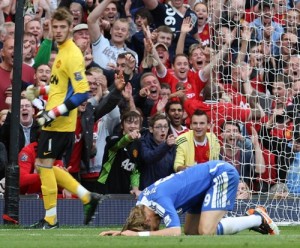 It doesn’t end there as United counter-attacked, Rooney unselfishly rolled the ball across for substitute, Berbatov to tap into an open goal but the Bulgarian’s shot trickled and Ashley Cole slid and knocked it out. Rooney was at fault for pulling the pass a little wide for Berbatov but such was the game that it would have been easier to score from the middle line than from a few yards out. Final Whistle! Ahhhhhh! A sigh of relief. From United’s perspective, there were some good play, some terrific play and also some careless play. United did very well whenever the ball went out to the wings with Ashley Young and Nani and Smalling and Evra on the overlap. Rooney and Hernandez were lively. De Gea saved well and looked calmer and steadier in goal but it’s a concern that for the second match in a row, the central midfield has failed to keep the possession well and been rather careless. In defence, United’s youngsters faced a real test getting to grips with the movement of the Chelsea forwards. Jones came out of it well but was at fault as he allowed Torres to run in behind of him to score. Evans had a mixed game, did well with the distribution of the ball and some of the defending but didn’t defend quite as well on other instances. The good thing is that United won without playing anywhere close to their best, a sign of champions. Now for Leeds!

2 thoughts on “Twilight Zone Of A Game”