Fans Grab the Headlines in a Forgettable Roses Derby 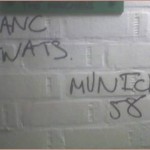 Well, well, Elland Road hasn’t changed. The Leeds team (a far cry from their financially irresponsible glory days) hasn’t changed. And neither has the press’ ability to deflect any discussion of a cakewalk of a game into moral outrage too. I’m talking about the “Istanbul” chants, but first a BRIEF summary of the game. Well, it was a fantastic first half display from United, merit badges handed out to Fryers, Valencia, Fabio, Prefect Owen and Head Boy Giggsy. Fryers looks confident, eager, yet composed, retained the ball well apart from a few 40 yard attempts at a “Hollywood Pass” (one which he completed by the way). But other than that a very comfortable first half display. 2nd half wasn’t quite as thrilling yet more an exercise in how to control and see out a victory in a hostile environment, culminating in a bizarre Berbatov/Carrick defensive partnership.

However, one thing of note, were the chants ringing round Elland Road, of course the customary inflammatory “12 Cantonas”, “Ooh Ahh Cantona” and “Leedscum” were fun for all. However, chants of “Istanbul” crept in to the living rooms of Sky subscribers, and the press has gone straight for the jugular. The witchunt has started, lead by The Times columnist Oliver Kay, all of the Daily Mail and reports of Mary Whitehouse rising up from beyond to join the hordes of people disgusted by a minority of Man Utd fans.

First of all, let me clear the air, I’m not condoning their actions, as mentioned on the Red Dead Podcast, I don’t join in, nor approve of chants aimed at Liverpool fans, allegations regarding Wenger, or mocking the tragic death of 2 Leeds supporters. The common reaction from many seems to be “the Leeds fans were mocking Munich”. As hard as it may be not to retaliate, we are all grown up enough to understand that two wrongs don’t make a right. However, what I do object to, is the medias portrayal of the (usually fantastic) United away support as some sort of gang of sick 80’s hooligan throwbacks, without much of a mention at all to the constant abuse small sections of Leeds supporters dish out.

It’s not just Leeds fans, year on year, Bolton imitate aeroplanes, I left the Reebok stadium last season utterly disgusted by it, City fans refer to us as “Munichs”, George Best’s minute silence ruined by surprise surprise, Leeds fans in 2005. Even the spokesman for Spirit of Shankley (MUST’s scouse opposite number) was caught on camera leading the Liverpool fans present in a rendition of one of their tasteless Munich ditties. It’s a very sad state of affairs, but all I can say is grow up to that minority of United fans, and shake my head at rival supporters acting the same, this weekend we are away to Stoke, anybody think their usual welcome to Man Utd fans will be noted by the press?