A Good Tonic To Overcome A Disappointment

4-1 is what the score board read at Old Trafford at the end of 90 minutes in Manchester United’s first game after the massive disappointment of the very early exit from the Champions League. Pre- game, I had called this match to be close as Wolverhampton Wanderers have run us close in our three encounters last season and even managed to beat us at Molinuex in the Premier League. It was close this season too but as the scoreline suggests it wasn’t too close and we could have scored more and win by a bigger margin. 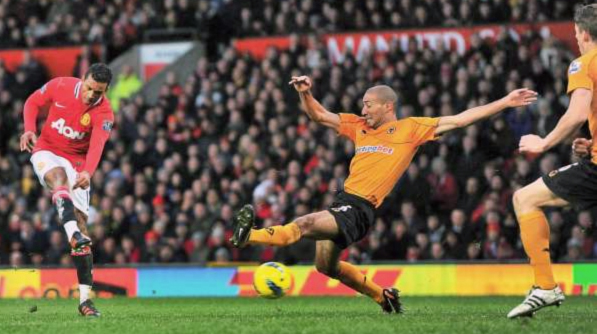 4-1 is what the score board read at Old Trafford at the end of 90 minutes in Manchester United’s first game after the massive disappointment of the very early exit from the Champions League. Pre- game, I had called this match to be close as Wolverhampton Wanderers have run us close in our three encounters last season and even managed to beat us at Molinuex in the Premier League. It was close this season too but as the scoreline suggests it wasn’t too close and we could have scored more and win by a bigger margin.

United started with a strong lineup perhaps the strongest and most in-form possible for Sir Alex’s selection. David De Gea kept his place in goal as Sir Alex kept faith in the Spanish youngster inspite of being partly culpable for the first goal United conceded against FC Basel. There was only one change in defence which was an expected one as Jonny Evans was chosen to replace club captain, Nemanja Vidic. The Northern Irishman has played enough games as understudy to both Rio Ferdinand and Vidic for him not to be considered as a youngster anymore. He has been much maligned with some below-par performances strewn with errors so Vidic’s season-ending injury could be the perfect opportunity for Evans to stake his claim in the first eleven in the long term as well as recover his lost reputation. In midfield, Nani started on the left as Antonio Valencia was recalled on the right wing, Ashley Young, who I felt was in the worst form among all the wingers was the one to lose out. In centre midfield, Michael Carrick came back from European suspension to start alongside Phil Jones who kept his place inspite of an uncharacteristic below-par performance. Up front, Wayne Rooney was partnered by Danny Welbeck as United went with two up front.

United were hungry from the start as they chase down possession and were winning the 50-50 challenges. They were first to almost every ball and looked to impose themselves on the visitors, keeping the ball in their half as much as possible as United attacked with verve and urgency that has not been seen in recent matches. Nani and Valencia took on their men and got crosses in, Rooney kept finding space and didn’t need a second invitation to take shots at goal while his sidekick in attack, Welbeck displayed good movement off the ball and with it. Behind them was Carrick pulling the strings and doing well to break-up the oppositions’ attacks with his positioning and clever tackling. His partner in midfield, Jones put in a typically energetic performance covering from box to box.

At the other end, United faced their biggest threat down their right wing through Matt Jarvis whose trickery and speed gave Chris Smalling a good battle and whenever Jarvis did win those battles, Ferdinand and Evans had to deal with the crosses into the box. United took the lead in the 17th minute when Nani shot from outside the box and the lead was doubled in the 27th minute when Rooney finally got a good shot on target. With the score 2-0 at half time, all it would take would be a goal by Wolves to possibly cast some doubts into the minds of the United players perhaps a little fragile mentally after days gone by. True to cue, within 2 minutes of the restart, Wolves equalised with an excellent header by Steven Fletcher from a cross by Jarvis. The header was so good that even the presence of Evans on the line couldn’t prevent the ball from dropping into the top corner. Now the heat was on United but today, on this display, no way would United crumble as United kept their cool and kept on attacking and kept possession. Valencia fizzed a ball across goal and Nani, Rooney and Welbeck lined up to tap it in but it was Nani with the vital touch to restore United’s 2 goal advantage. Rooney then added the fourth as he stretched back to meet another Valencia cross on the volley. United could have got a goal or two more but they didn’t and it finished 4-1 to United as United sat back and allowed possession to Wolves in the later stages of the game.

Overall, it was a very good team performance as United responded well from the disappointment of the Champions League exit. The only disappointment would be the goal conceded. However, the ghosts of that exit will linger along until United get a chance to exorcise it next season. The same goes for the Carling Cup exit after a second embarrassing exit in 2 seasons. In the Premier League, we have the ghosts of Manchester City to lay to  rest therefore not only were the 3 points vital today but also the 4 goals as we look to bridge the points and goal difference gap between our much hated neighbours and ourselves. Let’s hope Chelsea does us a favour and beats them on Monday so that we can maintain the 2 point deficit that we have at the moment. In terms of individual performances, there were many good performances. Nani carried on from where he left off at Basel and so did Ferdinand who is extremely vital now for United in view of Vidic’s absence. Rooney’s brace would have given him a much needed boost in confidence and knowing him, he will start on a scoring run now. Evans, in his first start post Vidic’s injury, had a decent game and got better as the match wore on but he certainly has to do better and I do hope for his sake and the club as a whole, he will improve and get better. De Gea had some shaky moments but relatively little to do. He hasn’t quite won over and convinced fans yet but looking at it rationally, he is very young and would take time to mature plus he is coming from a different country so he will need some time to get adjusted to life in England. Next up could be a tricky one as we face QPR away from home. Its United’s return to Loftus Road after our last visit there in the 1995-96 season. So another victory is needed to continue chasing our noisy neighbours!

Written by Editor
2 comments
Hoodoo of Craven Cottage
Into the Unknown sea of the Europa League!