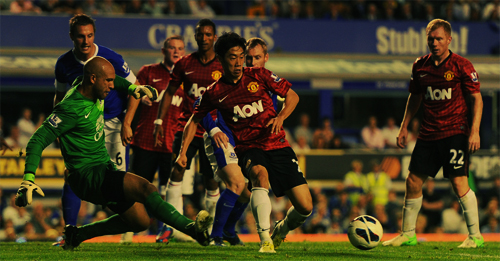 English football has returned and it’s been a great set of matches. From a neutral standpoint, the match between Everton and Manchester United was an even contest exemplifying the traits the EPL is associated with (grit and determination). Taking a closer look, United fans were quite concerned and seemingly, most of it stemmed from issues we have witnessed in the past which crept up on us once again.

Similar to the fixture at Old Trafford, Marouane Fellaini was a handful and became our undoing as the match progressed at Goodison Park. So what went wrong and what went right? And should United fans be expressing so much concern so early on in the season? I’ll address this in a 2-part article with this one being the match summar

For those who watched all of Man United’s pre-season games this summer, you shouldn’t be surprised by what we witnessed on Monday night. It’s important to remember our actual first-team only got 3 games together. Compared to last season where basically most of our first-team were available, we ended up taking the young ones on our tour through South Africa and China. While it was a great experience for them, one does wonder how our preparation would have turned out if we didn’t have the Euros/Olympics staggering our squad integration. It’s evident those who did play in such tournaments, enjoyed good run-outs and got some match sharpness. Although, it can be argued their late inclusion into our pre-season preparations has inevitably delayed our squad from gelling as soon as we would have liked. Looking at this way, one can see such a performance against Everton as somewhat expected. We definitely looked as we were still in pre-season mode.

Wayne Rooney did himself no favors. Losing the ball when it was played to his feet. Too slow to react to Everton’s pressure. Forcing passes which ended any chance of a quick counterattack. In the 1st half alone, I counted 7 times where Rooney either lost the ball, forced an unnecessary pass or simply a bad decision that resulted in a loss of possession. Now while this may not seem like a lot, it was enough to disrupt our rhythm. Despite some good exchanges between our midfield and forward line at times, we never really seemed to get going in the first half. It was more down to the brilliance of Kagawa’s vision and passing that created such opportunities. One glaring example was close to the end of the half where Kagawa sent in a beautiful ball to Rooney who was wide open. To the striker’s dismay, his header was poorly timed and the chance was spurned.

On a defensive note, we couldn’t handle Fellaini at all. This is where the stats were most telling. In the first half, Everton attempted and completed 9 diagonal/long ball passes to Fellaini. Each time Fellaini was able to find one of his teammates as they ran off him, trusting his ability to bring the ball down and bring others into play. Moyes’ tactics were quite simple. Fellaini was constantly pinned on Carrick, Valencia or one of our CMs for the majority of these long balls. It worked a treat as his physicality gave him an edge and allowed Everton to continuously bypass our midfield with ease. Furthermore, it allowed Everton to push up on our defensive line in an attempt to disrupt our tempo. Despite the amount of possession we enjoyed, we were less successful in turning our possession into clear chances.

In summary, our main issues in the first half were our use of the ball, Wayne Rooney being wasteful in possession, and Fellaini being a handful. It didn’t help we had a makeshift backline, but they held their own pretty well despite being poorly organized at times. I never thought Everton’s high ‘press’ really troubled us. Our own tempo was the undoing of that. There were moments where we moved the ball quickly but more often than not, we dawdled on the ball instead of letting the ball do the work. This also followed into the second half where our play gradually worsened.

Until the goal was scored, it was more of the same from both sides. While blame can be attributed to Carrick for losing out to Fellaini, Welbeck should have stayed on the post. It really was a shame we didn’t have another CB available as it could have made the difference in keeping Everton out and instilling the defensive organization we lacked.

Even though Everton dropped off after scoring, when they chose to attack through Fellaini, they attempted 11 and completed 10 diagonal/long ball passes to him. Once again, this highlighted our inability to deal with his physical and aerial threat.

As the half wore on, our urgency remained constant. Despite the substitutions we made, it made little impact to our tempo as we reverted to our strategy of going wide, pumping in a cross and hoping someone gets on the end of it. The deliveries were quite poor and it made me wonder where or if any breakthrough would come. This played right into Everton’s hands as they had more than enough bodies to deal with anything that came from our wings. We became predictable and our chance creation suffered as a result. We did come close with Cleverley’s blocked shot, Kagawa almost latching onto Van Persie’s through ball but that was as close as we got to tying up the scoreline. Failing to use Kagawa or Van Persie more reduced any cutting edge we wished to create. I guess we’ll have to wait to see our attack come into fruition. In my opinion, Rooney needs to be dropped. We know he’s a player who needs a run of games to reach top form, but I see little excuse for consistently messing up the basics or flat out being slow to react to the opposition.

There were only a few positives to take from this game. In his first game in England, Shinji Kagawa has already announced himself to the EPL. With an almost flawless performance, it was a shame his hard work and creativity wasn’t rewarded by his fellow attackers. Regardless, he’s shown how he can operate in his best position and I’m sure he will become more potent for us as the season progresses. I think he’s certainly cemented himself in the starting XI. He looked a class above everyone else.

It’s hard to believe we have a 21-year old doing so well when usually at this stage for most young keepers, they’re not even close to featuring for the first team. David De Gea was remarkable once again. His shot-stopping ability is a joy to behold. He kept up us in the game and he played some delicious passes out from the back. To think he’s still not even close to reaching his peak is scary and bodes well for his future at United. We have a good keeper on our books and he’s one of the few who can hold his head up high after Monday.

Although it was infrequent, we can be heartened by some of the combination play we did see. Once our attack begins to click, we’re going to be a tough team to beat. The question is when we’ll start to click and from the evidence of this match, Kagawa and RVP look like our most potent partnership if we’re looking to click as soon as possible. Thankfully, this was the first match of the season and our attackers will gradually become more accustomed to each other. We have plenty of options at our disposal and it won’t be long until we see some exciting play on a consistent basis.

I don’t think there’s much need to worry about. Everton played well and we simply couldn’t deal with their threat. The main concern is when we’ll get our defenders back. Once we do, we’ll be more balanced and actually have a foundation to build from when we attack. It’s evident we haven’t found our stride yet. However, it should serve as a warning to the rest of the league that when we do, we’ll be quite dangerous. Let’s not be so downhearted. There’s more to come from us and it’s only just begun.