This is part one of a two-part series of a tactical breakdown of Manchester United’s displays this week and potential conclusions to be taken from these performances.

After Manchester United’s defeat to Norwich, questions about our team selections and tactics have been raised again. Is there any coincidence with United’s poor play and our general shape and midfield pairings? Let’s explore. 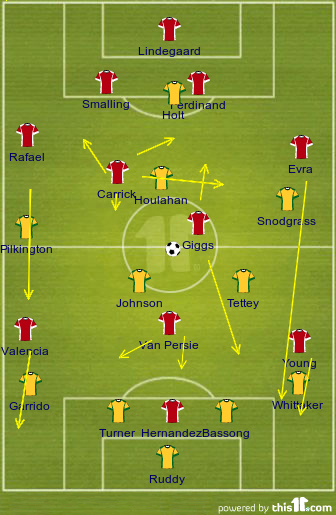 From the above figure, the arrows indicate the general movement the respective Manchester United players made relative to their starting position. The general shape is of no surprise. This is how Ferguson usually likes to employ his 4-4-2 system. Spreading the play wide, getting the full backs involved, passing the ball to our wide men in good positions for them to take on their man; these are some of the general observations which can be obtained from using this system.

In theory, Carrick and Giggs can sit deep and provide passes wide to our wingers who either beat their man and put in a cross or link up with the forwards and move inwards. The full backs can get forward to support the wingers and add to the build-up play. The forwards are instructed to spread the ball wide and then get into the box for the incoming cross. From a defensive standpoint, this means Carrick and Giggs along with the two center backs have to make sure any counterattack is quickly dealt with otherwise, the opposition will have a free run at goal. It also means our center backs are more susceptible to being in one-on-one situations.

On Saturday, Norwich had three in midfield and since it’s well known how we play 4-4-2, Hughton knew his players simply needed to remain organized in the middle and make sure Young and Valencia don’t put in good crosses. To make matters worse, Valencia and Young have both been subpar this season and their unwillingness to take advantage of the one-on-one situations meant most of United’s attacks petered out. Furthermore, United’s tempo was rather slow throughout the entire match. As a result, Norwich could simply shift from one flank to the other depending which side United attacked and not lose their shape. United was unable to force anything through the middle and any passes directed centrally were either immediately sent back to the passer or out to the winger/full back in space. Van Persie was largely isolated in the center with a lack of options around him. Hernandez was pushed up on Bassong and Turner.

The substitutions were also bizarre. When Sir Alex brought on Scholes, although United maintained more possession, the tempo was still lackluster and it meant play was forced wide even more. With Hernandez off the pitch, Norwich was able to constrict the space between their defensive lines even more and our sluggishness meant we had little choice but to play it wide. All this transpired whilst having Cleverley, Anderson, and Fletcher on the bench. Cleverley or Anderson could have given United more impetus through the middle and added a bit more variety to our attack. Nonetheless, United defaulted to a more hit and hope approach from out wide and failed to create any real openings as full time became imminent.

A poor display with inhibiting tactics and questions raised regarding the balance and shape of the team. Playing Giggs and Carrick in the middle was always going to be a risk. There were far too many occasions where Carrick was alone in covering for the backline as Giggs was too far forward. Neither were helped with both Young and Valencia having poor matches as their indecisiveness in good positions stunted any momentum from the flanks. It was even more puzzling for United to stick with the same approach for 90 minutes when it clearly wasn’t working. Sir Alex is fond of using 4-4-2 with wingers but should maybe look towards a backup plan in such precarious situations. On previous occasions, United’s strikeforce came to the fore to rescue the team from the jaws of defeat. As shown against Norwich, sooner or later your luck will run out.

Despite United’s position in the table, the performances call for some concern as there has been little sign of pulling out of this strange malaise which has resulted in United going behind in more than 70% of their matches this season. As always, with Sir Alex at the helm, United will always have a chance. Let’s hope his stubbornness does not lead him to put too much trust in Giggs and Scholes. We’ve been “in transition” for some time now, and as the season rolls on, it would be nice for the transition to progressively move forward. Cleverley and Anderson have done enough with their appearances to at least be in with a shout.