Darren Ferguson could not beat his father, Sir Alex Ferguson, in yesterday Barry Fry Testimonial game between Peterborough and Manchester United. United’s squad made hard work to win against a brave opponents, who could have recorded an excellent win if United keeper Tomasz Kuszczak was not in his day. 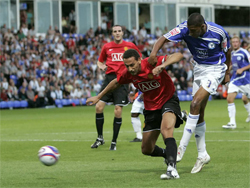 The Posh started the game very well and they had many chances to score. Scott Rendell seeing an early shot blocked and then Craig Morgan glanced a header wide of the target after Rio Ferdinand had given away the corner kick. Darren Fletcher took number seven shirt in United’s starting line-up which also featured England internationals Rio Ferdinand and Wes Brown as well as Patrice Evra, Carlos Tevez and Nani, but with all due respect to the Darren, Ronaldo’s absence was flagrant.Nani fired a shot by his left foot wide of the target on the half hour mark after Tevez cross to the back post.

Defender Shane Blackett put himself into folklore by passing the ball between Da Silva legs before unleashing a fierce drive which Kuszcak did very well to block. Mclean fired the rebound over the top under severe pressure from Evra as Posh came very close to the opening goal.

The first goal came after David Gray cross was too deep for everyone but Martin, attempting an extremely composed piece of defending, chested the ball past goalkeeper Joe Lewis and into the bottom corner.

United doubled the lead on 69 minutes and it was a brilliant strike from Gibson who let fly from distance and sent a dipping shot over Tyler and into the net.

Manchester United play Juventus at Old Trafford on Wednesday followed by the Community Shield against Portsmouth on Sunday in a busy week set to be dominated by talk of Ronaldo’s future.