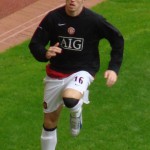 Manchester United squad will soon be boosted by the return of two important midfielders, Michael Carrick and Owen Hargreaves.The England duos are set to make their comebacks United Premiership game with West Bromwich Albion on 18th October. Carrick has missed the last six matches since breaking a bone in his foot against Liverpool a month ago.

The 27-year-old had only started one game before his Anfield sadness but manager Sir Alex Ferguson says he will almost surely be back on time to face the Baggies.

“We are expecting Michael to be available next week. He is almost back to full training now,” said the United boss.

He has fought the injury on and off ever since he arrived from Bayern Munich in the summer of 2007.

It struck him down again on the eve of the double winner’s pre-season tour of South Africa. Despite treatment and injections throughout last term, the problem returned during the close season and forced the 27-year-old to skip the tour.

His delayed return began with an appearance as sub against Liverpool and starts against Villarreal and Chelsea.

We hope the two players stay away from injuries.

Written by Editor
Stay away from Gianni Zuiverloon
Jaap Stam and Ferguson in United again!