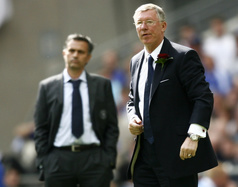 Manchester United needs a victory in the 2nd leg of last 16 UEFA Champions League tie against Inter Milan on Wednesday. A goalless draw will extend the game to extra time, while any draw with goal means Man United quintuple dream is over.

Sir Alex Ferguson side will be boosted by Rio Ferdinand following ankle injury he picked during last FA Cup game against Fulham. Ferguson also has concerns at right-back, with Gary Neville, Wes Brown and Rafael da Silva all injured, although John O’Shea trained after suffering with a heel injury of late.

Carlos Tevez may starts the game following his two goals in last game. Cristiano Ronaldo is returning to the starting line-up after the gaffer preferred to rest him so he feels fresh for Inter clash.

Meanwhile, Inter Milan have just two fit centre-backs after losing Marco Materazzi and Nicolas Burdisso to injury in the first half of their 2-0 victory over Genoa.

Manchester United and Inter Milan have met three times before in European competition.

Ten years ago, the clubs met at the quarter final stage of the Champions League with Manchester United progressing on a 3-1 aggregate and two weeks ago the first leg of this tie ended in a 0-0 draw.

Ryan Giggs and Javier Zanetti played in all three matches.