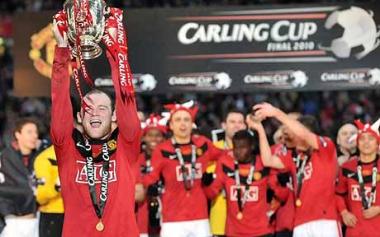 Ho Hum, another season, another trophy! Manchester United fans may well get that feeling at times. No, the Carling  Cup is not the most glamorous competition in world football but hey, a trophy is still a trophy especially when it’s another step in the race to overtake fierce rivals Liverpool as the most decorated club in English football.

Think about it, a total of 26 honours collected in the 24 years since Sir Alex Ferguson walked through the Old Trafford gates in November 1986. That’s half of all the trophies won by the club since joining the Football League! So the question is when will enough be enough? When will the hunger for success come to an end?

You would think that with people like Giggs, Scholes, Neville and others having a cupboard full of medals the appetite would have gone out of the team by now. The millions in their bank accounts should have been enough for them to stop busting their guts year after year but no! Why? Because we’re not talking about any old club here, this is Manchester United, that’s why!

The word ‘Pride’ is ingrained into the mind of every player who dons the famous red shirt.

It’s what this club is built upon. That pride is not simply in past glories, obtained in the early part of last century as other, inferior clubs tend to boast about.

United fans are able to take pride in today, in the present and they have every right to revel in it. The Carling Cup has been won, it can now be put to bed and the focus returns to a fourth successive Premiership and a third Champions League Final on the trot. That’s how this club operates, that’s the United way and there’s no real sign of it coming to an end any time soon.

Granted, not everything in the garden is rosy, the shadow of the Glazers and the debts forced upon the club still hang like dark clouds. One must never forget other dark days in the past however, days when Old Trafford was all but destroyed during the war, days when a championship winning team was decimated at Munich, days when the sour taste of relegation had to be accepted.

Manchester United successfully fought back to overcome each and every one of those nightmares just as the current financial woes will be. The Glazer family may one day go down a financial gurgler of their own making as excessive greed very often does.

They will not be able to take the club down with them however, the pride which is in the very soul of  Manchester United will never allow it.

Were you at Wembley to watch the Cup victory?  Share your experience with our readers.

Aaron Ramsey – In the joy of our triumph at Wembley let us also spare a thought for Ramsey and to that sickening accident at The Britania Stadium yesterday, and yes it was just that, a tragic accident. One also has to feel sorry for Ryan Shawcross on a day when he won England selection because as ugly as it looked, there was clearly no malice intended.

Having said that, it’s an absolute tragedy for young Ramsey. Nobody wants to see the career of a 19 year old possibly come to an end prematurely.  Good luck in your recovery Aaron, our thoughts are with you.