Why Manchester United was sold

Truly Reds does not normally do book reviews. Although many Manchester United ones go on the market each year, their reviews are normally left to specialist websites.There is the occasional one however which is worthy of bringing to the attention of our readers. GLORY, Glory! Man United in the 1990s – The Players’ Stories, by Andy Mitten is such a book. This short preview is sure to be of interest to all fans. 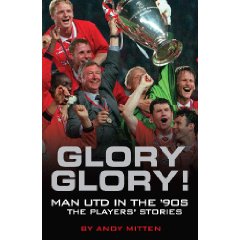 Truly Reds does not normally do book reviews. Although many Manchester United ones go on the market each year, their reviews are normally left to specialist websites. There is the occasional one however which is worthy of bringing to the attention of our readers. GLORY, Glory! Man United in the 1990s – The Players’  Stories, by Andy Mitten is such a book. This short preview is sure to be of interest to all fans.

IN 1991 United became a public limited company. For many this was the first step in a process which led inevitably to the Glazer takeover. The then chairman and chief executive Martin Edwards argues it was necessary given the circumstances after Hillsborough and makes the point that supporters could have changed the destiny of the club if they had not been so unwilling to participate.

“We needed money to rebuild the Stretford End” said Edwards “We had to go to the city for that money. By then we had to comply with the Taylor Report to make Old Trafford an all-seater stadium. We did a rights issue, every fan had a chance to buy shares in United, most didn’t. We wanted a third of the shares to be held by small individual shareholders, a third by institutional shareholders and the rest by supporters. That was what we were aiming for, maybe even more being held by supporters, but they never took up the shares. We raised the money to build the stand. The construction was also paid for by far higher ticket prices”

By 1992 United fans outraged at price hikes formed a group called HOSTAGE (Holders of Season Tickets Against Gross Exploitation). The fanzines were full of letters from fans who strongly objected to the 30 per cent price rises. “Look what we spent the money on” countered Edwards “We built the Stretford End. Look at Arsenal now, with a huge debt that they pay off each year. We always built stands out of the profits, the money that fans were paying was going back into the club. The share dividends were actually fairly small.”

IMUSA (The Independent Manchester United Supporters’ Association) was formed in 1995 and wanted a dialogue with Edwards – something he was not prepared to entertain. “I felt that IMUSA would have always wanted more and more and more” said Edwards. “And I didn’t want the independent supporters running the club. We had supporters on the board. Les Olive was a huge supporter, he always had the conscience of the supporters. Mike Edelson and Maurice Watkins were supporters in their own right. I would never have sold a player for a short-term gain. My interest in the club always had to be long term because that’s what my shares represented.”

In September 1998 Edwards received another offer. There was little chance of the potential buyer being unable to raise funds – it was Rupert Murdoch with a £623m bid. Against a backdrop of vocal fan dissent Edwards recommended the bid to United’s shareholders. “I thought Sky would have taken Manchester United to a level where nobody could have got near us” he said in his defence “That’s why I recommended their offer in 1998. When they approached us, we had gone 30 years without winning the European Cup. I felt that they could have pushed us onto the next level.”

“I saw the way some supporters responded to the Sky bid and considered it over the top. And I saw that some fans were rejoicing when the bid didn’t go through and maybe they thought that I was disappointed, I wasn’t. That was the decision the Office of Fair Trading made and I could live with that. I just felt that we had to consider the offer on behalf of the shareholders of a public company. If we believed it was in the best interest of shareholders then we had to recommend it. We did that and it was turned down, I’d done my duty.”

Edwards stepped down as Manchester United’s chief executive in 2000,  selling his final tranche of shares. “I’d given my life to United and missed out on a lot of home life, my children had grown up and married. I hadn’t devoted enough time to home life my wife wanted me to retire at 50 but I asked her for another five years. I stuck to that,” he added. “I didn’t sell my shareholding when the price was highest, I sold some at the initial float and a second chunk to put money in the children’s trusts. My children should not have been reliant on Manchester United. I didn’t want a large holding if I wasn’t running the show.”

Edwards was awarded the position of club president, with no executive powers. “I go along to every game as a fan and sit in the directors’ box,” he said. “I go with friends and family, I enjoy it. I can go in the boardroom if I want, or the dressing room. There’s a lot less pressure from when I used to worry about everything on and off the field. I still get butterflies if we are only winning 1-0 with five minutes to go and the other team are attacking, but I don’t carry the burden like I once did.”

And he was on the sidelines when United was finally sold to the Glazer family, in 2005. “It was a fait accompli” he said. “If somebody had the money to buy the shares it was an inevitability. I thought that time would tell whether they would be good owners and I still think that. I don’t think they have done anything drastically wrong so far. The crunch time will come when they exit. Will they saddle the club with the debt or just sell the club on for a profit because that’s all they are interested in? How will they leave the club?”

United had debts of £700m in 2009 “It concerns me that the club is in so much debt” said Edwards “The club are not in control, that family are in control of the debt. I can understand where the fans are coming from with their concerns. I’m not going to make any accusations because up to now they have behaved fairly well, supporting the manager and they haven’t disrupted the running of the club or the personnel within the club, time will tell.”

Edwards remains convinced that the most important person at the club is the manager. “The manager is still very important” he said “He’s had one hell of a run. I think he’ll think about moving on when he gets to 70. He will have done more years than Matt and his legacy will be there forever more. The next appointment is a huge decision and hopefully a manager will emerge to take over from Sir Alex”

There are still many doubts about the comment made by Edwards that selling the club was inevitable. Surely if there was a strong enough will to disrupt the sale, ways and means could have been found. The suspicion is that Edwards and the other major shareholders were unable to resist the huge profits that became available for the taking.

It’s all water under the bridge now of course – do you have any opinions that can be shared?