Manchester United have suffered their first away defeat in the Champions League in 18 matches after conceding a last-minute goal in Munich. But there is potentially even more damaging news for Sir Alex Ferguson and England with the sight of Wayne Rooney limping off in stoppage time with what appeared to be a potentially serious Achilles injury. 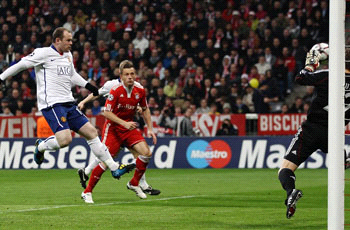 Manchester United have suffered their first away defeat in the Champions League in 18 matches after conceding a last-minute goal in Munich. But there is potentially even more damaging news for Sir Alex Ferguson and England with the sight of Wayne Rooney limping off in stoppage time with what appeared to be a potentially serious Achilles injury.

Rooney had given United a sensational second-minute lead in their Champions League quarter final first leg. The England striker met Nani’s right-wing free-kick with a close-range volley just 64 seconds into the game when his marker, Martin Demichelis, slipped. It took Rooney’s tally for the season to 34 in all competitions, 26 of those coming in the past 24 matches.

United carried the greater threat against a pedestrian Bayern backline early on, with Rooney seeing one shot blocked and Nani dragging another just past the post. Franck Ribery, who had been passed fit to play, got his first sniff of a chance midway through the first half. The France forward’s shot was half-blocked by Nemanja Vidic and Edwin van der Sar had to make an awkward save low to his left.

The warning signs were there for United, who were a little over-confident in possession and slightly lax in their marking. A marvellous ball off the top should have presented Hamit Altintop with a glorious shooting opportunity but the Turkey striker miscontrolled at the vital moment. Bayern went even closer after 27 minutes. Van der Sar inexplicably chose to punch away a cross from Ribery from the left, Altontip’s mishit volley fell straight to Ivica Olic, who made precious little contact with the ball from an unmarked position just three yards out.

Rooney should have doubled United’s advantage six minutes before the interval. Dimichelis missed a cross from Scholes, giving the striker a wonderful opening just seven yards from goal, but Hans-Jorg Butt spread himself well and made a vital save to keep his side in the tie

United, despite having the lead, were being outplayed. Altintop weaved his way past the timid challenges of Darren Fletcher and Nemanja Vidic before firing a goalbound shot which van der Sar beat away. The Bayern storm subsided and a lull in proceedings gave Sir Alex Ferguson the confidence to make an attacking switch in search of a second goal and he withdrew Park Ji Sung and Michael Carrick, replacing them with Dimitar Berbatov and Antonio Valencia.

But the move failed to pay dividends as Bayern levelled 13 minutes from time, Ribery finding the net after Gary Neville had been penalised and booked for deliebate handball. Having awoken from their slumbers, United almost regained the lead. Ryan Giggs, on as a substitute for Nani, curled an outswinging corner towards the penalty spot and Vidic met the set piece with a thumping header which crashed back off the crossbar.

But Bayern also went incredibly close to grabbing a winner themselves, Mario Gomez finding space behind United’s defence to get in a shot which Van der Sar half-stopped and looked up gratefully to see it drop the wrong side of the post.

The Germans though still found time to strike the decisive blow, Olic stealing the ball from Patrice Evra and planting a shot past van der Sar. As much as the result hurt United, the biggest concern is the possible serious injury suffered by Rooney.