At the end of 12 turbulent days which have almost certainly destroyed a season that had unexpectedly produced so much, everyone at Manchester United must now pick themselves up, see out a season in which for all its promise will most likely not produce anything more substantial than the often maligned Carling Cup, then start planning for a new challenge come next August.

With the benefit of hindsight, what United achieved in 2009-10 is no worse than what most fans had a right to expect nine months ago. There were many and varied reasons which have been well documented.

Cristiano Ronaldo went to Spain for £80m and was never truly replaced, Argentine international Carlos Tevez crossed to the sky blue end of town then virtually the whole backline was out of action at the same time for weeks. The hammer blows kept raining down on United until the final knock out punch was delivered with the injury to Wayne Rooney right as the season reached it’s business end.

It almost reminded one of an ageing Rocky Balboa trying to retain his title, getting knocked down round after round but even though he was battered, shattered and almost out on his feet he managed to get to the final round before going down for the count.

In the midst of all the gloom and dejection following the costly scoreless draw at Blackburn which must surely spell the end of any hope of retaining the Premier League title, a story appeared in the Daily Mirror which, as fanciful as it may seem, could be a ray of sunshine to Manchester United fans dazed by the turn of events which suddenly hit their club in the last couple of weeks. 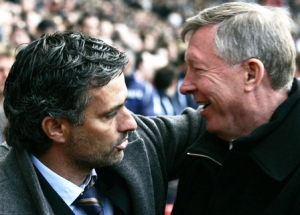 To put it in a nutshell, football journalist Michael Calvin raised the possibility on the weekend of  The Special One coming to Old Trafford next season to team up with Sir Alex and asks the question in a banner headline “Could Fergie and Mourinho form the most deadly double act in football history?” That my friends, could never be regarded as an understatement.

Calvin went on to explain that “Il Uno Speciale has already made a public statement which amounts to a “come and get me plea”. He couldn’t be more open about his unhappiness in Italy had he padlocked himself to the altar at Milan’s gothic cathedral”

Jose Mourinho had also previously made it clear that he was prepared to wait until such time as Sir Alex was ready to retire to throw his hat into the ring for what he considers to be the biggest job in football. The Inter Milan boss is currently preparing for a blockbuster Champions League semi final against Barcelona and should the unexpected happen by Inter reaching the final, Real Madrid would not be able to wait to show him the colour of their money.

As Calvin explained in his article “Outwitting Pep Guardiola in the semi final would complete an impressive set of scalps. Mourinho made his bones at Old Trafford with Porto. He then effortlessly burrowed under the skin of Liverpool’s Rafa Benitez, eclipsed Arsene Wenger then for good measure, got inside Carlo Ancelotti’s brain”

And there was more! “If football operated on the principles of an internet dating site, Mourinho and Manchester United would already be in the registry office because their profiles fit together so well. Regime change at Old Trafford will be more politically driven than a Papal election. United’s College of Cardinals, led discreetly by Sir Bobby Charlton, are already judging candidates’ character and philosophy. The speculators supporting the Glazers’ debt will demand more trophies as a distraction while they shake the money tree to its very roots.

Mourinho has a habit of defying convention. Agreeing to work alongside the great man, for a transitional season, would reek of respect for ­Ferguson, the club, and its legend. Such an arrangement has its precedents. Bob Paisley quietly advised Kenny Dalglish at Liverpool while Sir Alex himself valued Sir Matt Busby’s counsel in his formative years at United.

The past week has been brutal for Fergie, he has demeaned himself twice in defeat with transparent diversionary tactics. He dispels talk of a purge but only the terminally naive take his public words at face value. Since a new strategy is obviously unfolding he is unlikely to defy the Glazers. Impending arrivals Javier Hernandez and Chris Smalling are investments in potential, shopping on a budget.

His first instinct would probably be to reject the chance to share the burden but he admires the intelligence which underpins Mourinho’s mischief making, and he is certainly broadminded”

Articles like this one in the Daily Mirror are not uncommon in the mainstream media even though they do require a large helping of imagination. It is a fascinating prospect however, one which will create a lot of excitement in the football world, anticipation for Manchester United fans and anguish for their rivals. As Calvin rightly concludes “They would make a dream team for United. And a nightmare for the rest”

Can you see a Dream Team of Ferguson and Mourinho being workable?

1 thought on “A Ferguson-Mourinho Dream Team will be deadly”