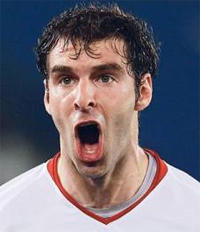 A Report from News of the World suggested that Sir Alex Ferguson will try to sign Estudiantes forward Mauro Boselli this summer. Boselli is unlikely to appear in Argentina squad this World Cup as Diego Maradona is satisfied with current attackers such as Messi and Tevez.

The previous fact hints on Boselli price that would cost the Red Devils just £5 million. United have just signed Javier Hernandez from Chivas de Guadalajara after being knocked out from Bayern Munich earlier this month and Boselli MAY be the second American to join United this summer.

In term of football, Boselli arrival will give journalists an extra reason that Dimitar Berbatov could be set for a move to Italy. Whether Berbatov stays or not, is Boselli a good forward for Man United? Will United bring the player to replace Berbatov or Sir Alex Ferguson has another idea in his mind? Boselli, who started his career with Boca Juniors, hasn’t that massive scoring record until he joined Estudiantes where he scored 28 goals in 52 league appearances. He also scored 17 goals in international cups; 12 in Copa Libertadores, 4 in Copa Sudamericana and 1 in the FIFA Club World Cup against Barcelona last December.

As we all know, a majority of South American clubs live a much more hand to mouth life then their European equivalents. So that they depend too much on European transfer cash. But this change recently due to most European teams financial problems. (Argentina total international transfer income was £12m). This could justify Mauro Boselli’s cheap price tag.

In the other hand, this could indicate two things. First, the glazer family won’t give Fergie a massive transfer kitty to buy players in his wish-list. 2nd, after the £30m signing of Berbatov two years ago, Sir Alex Ferguson won’t take the risk again in signing expensive big name players and he will concentrate only in players who can help the team with the potential to shine and this will result an increase in their values.

Some people will say United are unlucky with players from Argentina (Veron, Heinze and Tevez) and that is why SAF should stay away from brining them to Old Trafford. The final decision will be heard soon!

Finally, I leave you with some of Mauro Boselli goals (First goal looks similar to the one scored by Diego Maradona with Napoli in UEFA CUP).

Do you believe Boselli is the player to shine with United?