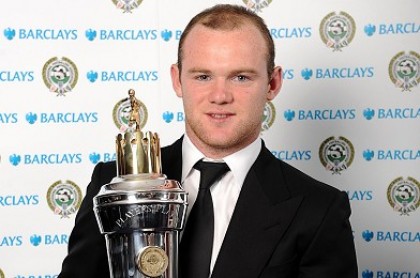 Wayne Rooney is the new Professional Footballers’ Association Player of the Year after he was announced as the runaway winner. The announcement that the England striker has won the award means that it is the fourth successive season that an Old Trafford player has received the accolade. Ryan Giggs won the award last year following on from Cristiano Ronaldo, who was player of the year in the two previous seasons.

The Manchester United striker has enjoyed an outstanding season, even though he is fighting to be fit for the World Cup.  Rooney helped United win the Carling Cup, has scored a total of 34 goals for his club this season and the striker could still win the Premier League title after United beat Spurs 3-1 at Old Trafford on Saturday.

Rooney was rushed back from his recent ankle injury, caused by what the club describe as “fatigue” and tweaked his groin in training. He missed Saturday’s victory over Tottenham with manager Sir Alex Ferguson suggesting that he would be missing for two or three weeks but those fears have now been allayed. Rooney confirmed last night that he expects to have recovered in time for the meeting with Stoke at Old Trafford on May 9, a game that could yet determine the outcome of this season’s Premier League title race.

Still only 24, he has already received a litany of awards both personally and with United. In 2002 he won the BBC Sports Young Personality of the Year. And in 2005 and 2006, he was named the PFA Young Player of the Year. He is also a firm favourite to win the Football Writers’ Footballer of the Year award to make it magnificent double. At club level he has already won three league titles and enjoyed two League Cup successes along with the European Champions League.

Rooney who becomes the first Englishman to win the award since Steven Gerrard in 2006, paid tribute to the influence United manager Sir Alex Ferguson has had on his career. “Sir Alex is a great manager who has really brought me on as a player since I joined United” he said “His hunger passes through to the players. It’s great to see that he’s pushing 70 and hasn’t changed a bit  I’m sure he’ll be here for a long time yet”

What would have been your Premier League Team of the Year?