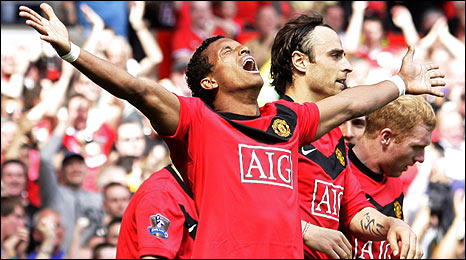 Manchester United had a new Portuguese star to acclaim as Nani emerged the late match winner against Tottenham Hotspur with a moment of brilliance to send the Red Devils top of the Barclays Premier League. Filling Cristiano Ronaldo’s boots was always going to be a tall order and Nani may never quite get there but even Ronaldo would have applauded the nerveless chip that broke Tottenham hearts 10 minutes from time after he had raced onto Federico Macheda’s lay-off.

It put the champions back in front in a game they had to win and when Ryan Giggs drilled home his  second penaltyhe transferred all the championship pressure onto Chelsea who face Stoke at Stamford Bridge on Sunday. Wayne Rooney’s absence created a degree of anxiety in the home ranks which the opening 45 minutes did little to dispel.

It took United half an hour to manage their first effort on goal when Antonio Valencia ignored the pleas for a pass from Dimitar Berbatov and went for goal himself bringing a smart low save out of Heurelho Gomes. Berbatov and Patrice Evra wasted decent opportunities shortly afterwards although the Reds best chance had come slightly earlier when Gareth Bale failed to cut out an Evra cross.

Not that Spurs were under a huge amount of pressure. A point would have been a decent return for Tottenham in their quest for that elusive Champions League place and Redknapp would have been far more pleased than old mate Ferguson with how the opening period panned out. He would have been delirious if Roman Pavlyuchenko had found the net when Jermain Defoe provided a chested lay off after David Bentley lofted a cross into the home box. Instead, the Russian screwed his effort badly wide.

It was the start of a far more entertaining second period which took its first significant twist 13 minutes after the re start when Berbatov burst past Benoit Assou-Ekotto. Although he appeared to have run down a cul-de-sac on the edge of the Spurs box, Berbatov remained aware of Evra’s presence. Assou-Ekotto knew the Frenchman was there too and when Berbatov supplied Evra with an impudent back heel the defender panicked, lunged in and sent his opponent flying.

There was more debate about who would take the spot kick than whether it should be given before Giggs assumed the responsibility his role as captain demanded. It was not the most clinical of finishes but to Old Trafford’s relief he found the bottom right hand corner of Gomes’ goal.

In times gone by that would have been it but with Antonio Valencia and Patrice Evra departing due to injury and ill health respectively and Aaron Lennon arriving for the visitors, the pendulum swung back Tottenham’s way. Given the significance of the equaliser, Ferguson would have been fuming at how easily it was conceded.

King brushed aside Michael Carrick far too easily as he met Bale’s corner with a firm header that Rafael would have cleared if he had remained by the post. Instead he moved away and despite his acrobatics, the Brazilian was unable to keep it out. At that point, Spurs looked by far the more likely winners as Peter Crouch reinforced their attacking options.

But from virtually nowhere United struck again 10 minutes from time as their own substitute Federico Macheda collected Darren Fletcher’s pass before finding Nani. There was not much space but he kept his cool and as Gomes raced out he superbly chipped him.

The green and gold clad United supporters were still celebrating when Wilson Palacios clambered all over Nani four minutes from time, offering Giggs another spot kick which he buried into the opposite corner.

5 thoughts on “Tottenham Hotspur review: United top of the heap”