FLASHBACK: Maradona was no match for Robson

Among the many benefits of being a Manchester United fan, one of the biggest are the special memories that stays with you during your lifetime. European Cup nights in the Theatre of Dreams are without doubt some of the very best but even amongst those, some nights stand out above others. Each one is memorable in its own way but for pure drama the European Cup Winners Cup quarter final second leg against a Diego Maradona led Barcelona in March 1984 was arguably the best.

Among the many benefits of being a Manchester United fan, one of the biggest are the special memories that stays with you during your lifetime. European Cup nights in the Theatre of Dreams are without doubt some of the very best but even amongst those, some nights stand out above others. Each one is memorable in its own way but for pure drama the European Cup Winners Cup quarter final second leg against a Diego Maradona led Barcelona in March 1984 was arguably the best. 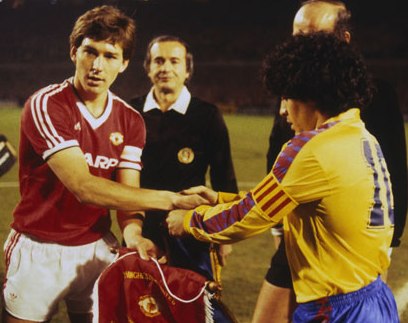 Few gave the Reds much hope of progressing to the fourth round after Ron Atkinson’s men came away from the first leg at the Nou Camp trailing 2-0. “It just wasn’t our night” remembers captain Bryan Robson “But having seen Barcelona with everything going for them, we knew that we were capable of getting through despite their lead”

His words proved prophetic. Roared on by a clamorous 58,547 crowd, the Reds ran riot at Old Trafford producing a rousing comeback to quicken the pulse rate.

United had lost the first leg through a Graeme Hogg own goal and Juan Carlos Rojo’s last minute strike. Robson and his team were given little chance of overturning that deficit against a side managed by Argentina’s World Cup winning coach Cesar Luis Menotti, boasting a Maradona who was nearing his peak and the German legend Bernd Schuster. But United had their own icon in Robson, who showed why he was known to Red Devils fans as Captain Marvel with his display that night.

Robson’s full length diving header on 22 minutes kept the crowd believing. The fans were buoyed with optimism, the players sensed Barça were wobbling, and in a swift second half spell the comeback was complete. It was the England midfielder again who sent the then capacity crowd into raptures when he was on the spot to strike home a parried Ray Wilkins cross on 50 minutes. 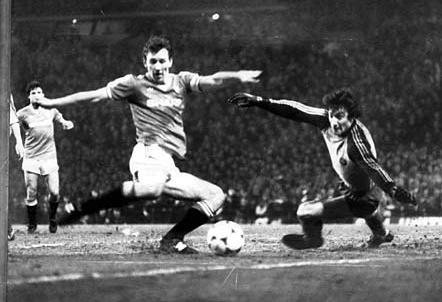 United had wiped out the deficit leaving the tie level on aggregate but from then on there was only ever going to be one winner. As United poured forward, Frank Stapleton latched on to a Norman Whiteside knockdown and smashed the ball into the net from an acute angle to send his side into the semi final on a 3-2 aggregate.

Barça rallied but United held firm for a remarkable result. Big Ron danced with delight down the touchline, Robson was carried shoulder high from the pitch and the memories still tickle the hairs on the back of the neck for those who can proudly boast “I was there.”

Former Manchester United legend Pat Crerand, a member of the 1968 European Cup winning side and who was at Old Trafford on that night remembers “For me and many other people the outstanding memory is the1984 win over Barcelona when we were 2-0 down from the first leg and came back to win 3-0. It was a fantastically emotional night, one of the great, great nights at Old Trafford”

Newton-le-Willows fan Duncan Thorpe remembers making the short trip from Ordsall that night and that classic match remains firmly implanted in his memory. “I was a scrawny eight year old squeezed into an electric Old Trafford. We couldn’t get into the Stretford End for that game, so we were stood near the corner flag” he remembers “I spent most of the game just looking at Maradona thinking “I can’t believe I’m actually watching Diego Maradona!”

“We needed three goals to go through, so when we went 2-0 up you just knew we were going to grab the winner. Up popped Frank Stapleton – the whole place erupted and I remember Frank running towards us spinning his arm around like a windmill! People were jumping up and down screaming and hugging each other. And when we went home after the game people were singing all the way back to Ordsall.

The special thing for me was that I had been so excited about going to see Maradona and yet it took me a few days afterwards to remember that he even played in the match. I’d forgotten about him thanks to a fantastic performance from our United players and supporters!

United bowed out 3-2 on aggregate in the semi final to a Michel Platini inspired Juventus. Maradona left for Napoli at the end of the season where he led them to their only two Serie A titles before turning on a series of virtuoso performances at the 1986 World Cup to win it for Argentina virtually single handed. But on that memorable night at Old Trafford, Maradona was no match for Captain Marvel.

Were you at OT that night in 1984? Share your memories with our younger fans.