The destiny of  Manchester United could have so easily gone in a totally different direction had the father of Sir Alex Ferguson taken the same decision as the rest of his extended family and followed them to Canada in the late fifties. It could have so easily happened as thousands of Scots were migrating to the new world in search of a better life for their families at that time. The young Ferguson was on the verge of doing the same when fate unexpectedly stepped in and changed the course of football history.

Four years later Ferguson himself was in his early twenties, struggling to make a name for himself as a centre forward with the St Johnstone reserve team and seriously considering giving football away to join his Uncles, Aunties and many cousins in Toronto. He could not see a future in the game for himself and virtually made up his mind to leave Scotland. 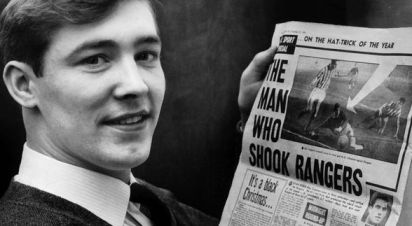 That decision was dramatically reversed on one December Friday in 1963 when Ferguson was suddenly called up to play for the first team against Rangers at Ibrox, scored a hat trick, became established in the first division, forgot all about migrating to Canada and the rest is history.

Ferguson’s large extended family is still in Canada which is why there will be a reunion this summer when he takes Manchester United on a pre season tour there. The Red Devils toured the U.S. in 2003 and 2004 but are adding Toronto to their North American itinerary this year. “It’s new in terms of a game, yes, but I know Toronto. I’ve got a lot of family there” Ferguson said.

“My dad’s family moved there in 1959. I’ve got nine direct cousins and about 40 second cousins. I’ve got an aunt still alive and my grandmother died there. She’s buried in Toronto. I’ve got an uncle also buried there. My great aunt, who was very close to me, died there last year so we’ve got a big family connection”. The United boss plans a family get together on the day before his team plays Celtic on July 16

Manchester United has toured the Far East in recent pre seasons, taking advantage of an “amazing fan base” according to Ferguson. But he says the previous U.S. visits “have been the best tours of all” United has other ties to Canada. Current midfielder Owen Hargreaves was born and raised in Calgary while Hamilton born Jimmy Nicholl played for the Red Devils from 1974 to 1982 scoring six goals in 247 games.

Both elected to play for the country of their father’s birth rather than Canada. Hargreaves is an England international, while Nicholl who was raised in Belfast, won 73 caps for Northern Ireland. “Good guy Jimmy” Ferguson said of Nicholl, who is an assistant manager with Scotland’s Kilmarnock.

As for Hargreaves, he will be part of the tour squad as he looks to return from an extended absence due to chronic patellar tendonitis that required several surgeries by world renowned Dr. Richard Steadman in Colorado. Earlier this month Hargreaves saw his first action with the senior team since September 2008.

“He’s had a tough time, there’s no question” said Ferguson. “I think the step now for Owen is that mental one, having the confidence to actually go on the field in terms of a game” he added “All his training performances have been good. He’s been enthusiastic about it but he needs that big step forward to playing a game”

“I know the experience of World Cups in the past, having to deal with the aftermath of it is always difficult. The World Cup players need a rest” Asked about possible squad acquisitions this summer, Ferguson turned the subject to United’s recent history of acquiring young talent, citing Rooney, Anderson, Nani, Antonio Valencia, Gabriel Obertan and Hernandez.

“We’re good at that” he said. “and people don’t recognize we’ve spent over £20 million in young players this year: Smalling, Hernandez and Mame Diouf. People say ‘Yeah, you’re not spending money’ We are spending money but we’re spending it in an area where we feel good at, bringing young players to the club so there’s a foundation and we’re developing a long term part of the club then”

A recent newspaper report linked United to 19 year old Everton midfielder Jack Rodwell. The 68-year old Ferguson, who took over United in November 1986, has won more than 30 trophies with the club. He is the longest serving manager in England, according to the League Managers Association which says there have been 969 managerial dismissals since he was appointed United boss.

Life is full of twists and turns, Ferguson could have so easily ended up spending most of his adult life settled in Toronto watching Manchester United on television instead of managing it. Had he not scored that unexpected hat trick for St Johnstone at Ibrox all those years ago, British football in general and United in particular would have been much the poorer.

Are pre season tours such as this one just money making exercises?