Peter Schmeichel is renowned as one of the greatest goalkeepers of all time after claiming a bundle of silverware at Manchester United during the 90s and leading Denmark to an unlikely Euro 1992 victory. The Old Trafford legend spoke to au.fourfourtwo.com about why this World Cup has been characterised by a series of fumbling keeper mistakes.

“When you change the ball as dramatically as you have this time around you are bound to have goals conceded that look like goalkeeper mistakes” said Schmeichel “Okay, the Robert Green mistake was one of those unfortunate things, but to call Holland’s goal against Japan a goalkeeping mistake is not right. The Japanese goalkeeper was in the right place for where one of the old balls would have went” 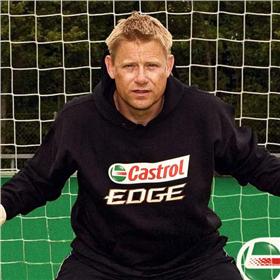 “If you use that ball for the next two or three years you will see goalkeepers make less and less mistakes as they would have adjusted to the line the ball takes. Whenever they change the ball it is the goalkeepers who suffer” he insisted. While Schmeichel hadn’t managed to see any of the Socceroos encounters in South Africa due to various work and travel commitments, he did speak highly of Fulham goalkeeper Mark Schwarzer.

“I’ve seen Schwarzer play several times this year and I cover the Europa League and he has been doing incredibly well. He needed to get away from Middlesbrough to get some recognition but once he played in Europe with Fulham you really saw his influence. This year has probably been his best year” he continued “However if you really, really want to make it into the big time you have to play in the Champions League and be going for the Championship in whichever country you play in. Fulham did well to make the final of the Europa League and Schwarzer was instrumental in that success.”

As the World Cup moves into the knockout stages, penalty shoot-outs are likely to play a pivotal role in the remainder of the tournament. “Penalties are about more than technique” explained Schmeichel. “At the World Cup it is the best players in the world taking penalties so the technique is there but the difference between the winners and the losers is the mentality. Who has got the nerve and how much pressure do you have on you?

“When I faced a penalty I spent 80 per cent of my concentration on myself and the other 20 per cent was about getting the attention of the shooter. I’d try and look at him and see if I could tell where he was going to put the ball based on how he lined himself up.”

Schmeichel was keen to highlight the valid uses of the Castrol EDGE Penalty Analysis initiative, but admitted it might have been something he would have shunned in his playing days. “The Castrol EDGE Penalty Analysis is something that if someone approached me while I was playing and said they had all this data on penalties I would not have been interested” said Schmeichel “but I have seen the graphics and it proves beyond any doubt that there is a pattern to how people take penalties.

“Someone like Frank Lampard, who takes penalties for Chelsea only puts the ball in two places. It is either to the goalkeeper’s low right or to his high left, so you almost have a 50/50 chance of saving his spot kick. I would have loved to have had such information when I was playing.”

Peter Schmeichel was talking at the launch of the Castrol EDGE Penalty Analysis initiative. The online tool gives the inside track on where every penalty taker is most likely to score, and could be the secret weapon for goalkeepers facing the prospect of a penalty shoot-out in the knockout stages of the 2010 FIFA World Cup.

Was Peter Schmeichel the greatest ever Manchester United keeper?

Written by Frank Scicluna
New rules, not debts may be Ferguson’s problem
Not the end but just the beginning for Paul Scholes