Like every other member of that Manchester United side which brought home that memorable 1999 treble, former Manchester United and England midfielder Nicky Butt will always hold a special place in the history of the club. The 35 year old who hung up his boots in the summer says he will always be United through and through but after six years playing at Newcastle he admits that his loyalties were divided when the Magpies faced United in the opening match of the new season.

Like every other member of that Manchester United side which brought home that memorable 1999 treble, former Manchester United and England midfielder Nicky Butt will always hold a special place in the history of the club. The 35 year old who hung up his boots in the summer says he will always be United through and through but after six years playing at Newcastle he admits that his loyalties were divided when the Magpies faced United in the opening match of the new season.

Butt won 6 Premiership titles, 3 FA Cups and a European Champions League during his 17 years at Old Trafford, growing up with the likes of Paul Scholes, Ryan Giggs, David Beckham and the Neville brothers. Reflecting on half a lifetime at United he remembers how he “knew everyone inside the club from the canteen ladies and the chefs to the kit people. That made leaving very hard” he recalls “the most emotional thing I’ve ever had to do. If you play for United week in week out you don’t want to leave but I got to the stage where I wasn’t even second choice in midfield.”

“As a professional I knew it was time to go” he continued “it was something that had to happen. The manager was brilliant because he understood but bigger and better players than me have left United and will do in the future. When I was leaving I had a few choices but I only wanted to go to Newcastle. Although I had some tough times at St James’ Park there are no regrets, none at all. Manchester United will always have a massive place in my heart but Newcastle has a strong place there too.”

Apart from the treble season, his many years at United were full of highlights as part of the Golden Generation. Studying a picture of the fresh faced young lads of which he was a member he remembered that “Scholes was a bit fat, Becks wasn’t blond, one or two bad hair cuts. What was it, 17 years ago? It is good to look back” he said looking back on a career spanning the explosion of television, money, fame and global interest in the English game. 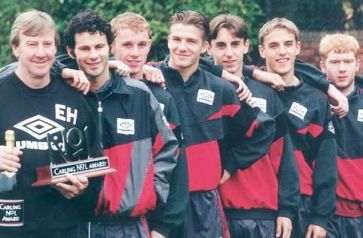 “I remember that picture being taken” Butt smiled “It was a bit before Hansen said the famous you’ll never win anything with kids! Deep down I was watching Match of the Day after we’d been beaten 4-1 by Villa and thinking maybe he is right, maybe we are not good enough. At the time the manager sold Ince, Kanchelskis, Hughes, all men who were world class players. The manager stood by us and the rest is history.

“We all still speak, ask how things are going, share the ups and downs. You’ll get Giggsy on the phone and he’s flying. You could speak to Gaz and he was maybe on a down and injured a lot. Speak to me and I am in the Championship and not playing as much as I want. Speak to Scholesy and he can’t do the things he used to do. It changes every month” he admits.

The proud holder of 39 England caps revealed that “I have none of the stuff we won in the house. No pictures or shirts. All the memorabilia is stored away. My medals are in the bank. My shirts and my caps are in the attic. I’ll do something when I’m finished for my kids. It is not me to dwell on it. The highlights are making your debut and winning the treble. I came on for Bryan Robson, who was my hero at the time, still is. We played Oldham and won 3-something. Winning the treble was massive. So was winning the double as kids.”

Those were the days of special United “bonding sessions” which he reckons footballers these days cannot get away with. “Over the years football principles have not changed. You work hard, train hard go out and win games to please the fans. Away from that it has changed. We had big superstars like Robson, Keane, Schmeichel. We would be off go-karting then meet up at a local pub and basically get bladdered, get drunk, and have a good day” he admitted “it was fine because we’d not have a game for a week.

It was a bonding session at the right time. You rarely go out together like that now but we used to do that religiously. Bryan Robson would hammer you if you didn’t turn up. Part of your duty, he’d say. Now young lads go out and they are only doing what I was at 17-18 but they are getting caught out, getting bad publicity. Regardless of the money or the fame in the game now you still have to be able to go out and have a life, see your friends but do it the right way. Stay away from trouble.”

Old mate Beckham has now become an icon but Butt has shunned the trappings of stardom “I have never gone for the fame thing. It was the way I was brought up and also the way of our first manager. The only one who has done that is Becks who really liked that lifestyle. That is not a criticism, no one works harder than him, it is just the way he is. Sometimes you think I’d like to go to one of those fancy parties, but I can go to my local pub with my mates that I have been to school with and not get a bit of hassle. I can go anywhere without someone putting a camera in my face.”

As for a possible return to the game in some capacity Butt admitted that “To be honest, I’m not really fussed at the moment to go playing again or get into coaching. I’ve had a few calls from people wanting me to play this season but nothing that has excited me enough.”

COMMENT: Although I was hesitant to make this article personal, I thought that it may be interesting to share one of my memories of Nicky Butt. As a youngster, he was a member of the England 1993 World Youth Cup squad together with the likes of David Unsworth, Darren Caskey, Nick Barnby and Jamie Pollock. I was kit manager for Australia at the time, staying at the same hotel as the England squad prior to the third place playoff in Sydney.

Butt was the only Manchester United player in that squad, so he became an obvious target to approach for a customary exchange of shirts. It’s the reason why a number 14 England shirt, with ‘BUTT’ on the back, is still hanging in my wardrobe amongst my many other prized football possessions. And why nearly 20 years later, I’m writing about that same shy, 18 year old kid who went on to achieve so much in a long career for England and United!