Former Manchester United defender Kevin Moran will be watching Saturdays clash at Goodison Park with special interest – and not because it will be Wayne Rooney’s first appearance for United since his ‘troubles’ erupted. Moran had his own troubles a quarter of a century ago when he set an unwanted record by going  into the history books as  the first player to be sent off in an FA Cup Final during Manchester United’s 1-0 extra time defeat of Everton in 1985.

The tough as teak Irishman has always maintained that he was harshly treated for his challenge on Everton’s Peter Reid however, a claim that was later reinforced by television pictures. “I didn’t think it was a foul. I had no intention of pulling Peter Reid down and felt I never touched him. I went into the tackle from the side and his momentum flicked him over as if I’d clattered him. I couldn’t believe it when I got a straight red.”

“I was in a bit of a daze coming off. I thought we might lose the game because of me. I sat on the bench in a state of shock until Norman scored. Then I went mad, jumping up and down. Once we’d won, I was fine. People kept saying ‘I’m sorry for you’ but I felt no different from the other players at the celebrations.”  Given there wasn’t a precedent, the FA held Moran’s medal back. “That was petty” he says “it became a media debate about whether I should get a medal or not. I was finally told on the plane for the celebratory Caribbean trip that I’d get it.

Despite playing with 10 men for so much of  the game and scores still level after 90 minutes, Norman Whiteside netted a 110th minute winner to secure a memorable victory and prevent Everton from adding the FA Cup to the League Championship and European Cup Winners’ Cup which had already been won. 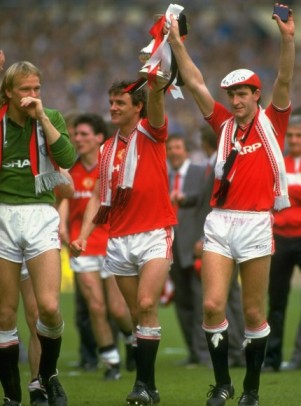 As events turned out, United were unable to compete in the following season’s Cup Winner’s Cup because all English clubs were banned from European competitions indefinitely two weeks later. That was as a result of the Heysel disaster on 29 May 1985 in which rioting by Liverpool and Juventus fans at the European Cup final resulted in the death of 39 spectators.

It must be difficult for younger football fans to appreciate just how significant Moran’s red card was at the time. When United and Everton meet on Saturday there is a very good chance that one of the teams will finish with ten men. It was only a fortnight ago that a record was set when eight players were dismissed over a single weekend. In total, two dozen have been brandished in the Premier League to date but a red card was a huge news event 25 years ago especially when it came in the most high profile match of the season.

When Moran retired in 1994 at the age of 38, he could look back on a career which also earned him 71 caps for the Republic of Ireland. Since then, the Dubliner has worked in sports management as part of the group which looks after Wayne Rooney. “I also do TV work with Frank Stapleton in Ireland, so I get to watch United. It’s not a bad life.”