There may finally be some good news for chronically injured Manchester United midfielder Owen Hargreaves. Orthopedic consultant Sanjiv Jari from the Manchester Sports Medicine Clinic has given an opinion that the outlook may not be as grim as it currently appears. Although manager Sir Alex Ferguson has named Hargreaves in United’s 25 man Premier League squad for the 2010-11 campaign, there has been no up to date medical bulletin from Old Trafford on his condition.

“We don’t know what happened in the summer that made Owen return to the clinic in America” Jari admitted “It would be a concern if he has gone back for more surgery. But if he has returned because of a setback in rehab then I don’t think it is necessarily a major issue.”

“Had the recent setback been a major one I think Hargreaves would have been forced to consider his future and you’d know about it by now. Hopefully it was a minor setback and he can work through that. Rather than a signal that things are bleak it may be more of a psychological blow for the player and his rehab team than anything else” he said. 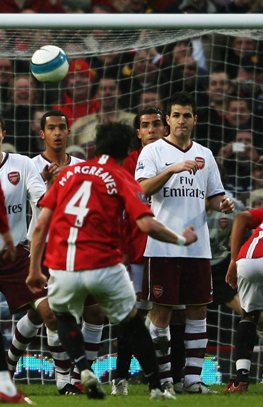 “I understand that fans may be seriously worried because Owen is still not back after two years but I am not unduly surprised he has been out this long. There is no time limit to these chronic problems. As long as he is making progress I would not be unduly concerned.”

“The surgery he has had is only part of it” Jari continued “the rehab is the unknown factor. I believe his main problem has been patella tendonitis but there maybe wear and tear involved in all this. If that is the case then that can slow down your recovery so the length of time it is taking is not really an issue.”

The fact that Ferguson has not included Hargreaves in his Champions League squad is a clear indication that he is not expected back in action until at least the New Year but at what point would a specialist sit down with him and break the news that his career is over?

“As long as he is progressing with his strengthening and conditioning work they will continue as long as it takes even though it may be frustrating” he responds “the key is not to push him. He should be allowed to go at his own rate. Yes, this kind of injury has ended sportsmen’s careers but that’s not in every case. Without knowing the full facts and going on the face of it, I’m sure if Owen can comeback and play for United, he will strive to do so.”

“The next stage is another issue” he says “there is a good chance he will return but the bigger question is how will his knees cope with the stress and rigours of a season playing at Manchester United’s level? You wouldn’t be surprised at any stage if he breaks down and says enough is enough” added Jari “if you are not getting anywhere and are continuously battering your head against a brick wall then you have to consider it.”

“When you are dealing with a professional athlete that is a very difficult decision to come to” he admits before continuing “my view would always be to give them the best opportunity and go on as long as you can. I think it is up to the player to make the decision. You can advise but the lead has to come from the athlete. They know when they’ve had enough and there’s no use continuing.”

Hargreaves has shown in the last two years that he is a determined fighter otherwise he would have given up the battle long ago. While many others see very little chance of the England international having any future at the top level, it must be heartening for him to note that both Ferguson and someone with the medical knowledge of Sanjiv Jari still have faith in his ability to make a comeback.

Is Hargreaves making a comeback for United nothing more than wishful thinking?