A lack of fluency in the English language by Ireland coach Giovanni Trapattoni and in Italian by Manchester United midfielder Darron Gibson could have had dire consequences for the international future of the 22 year old. Reports over the weekend claimed the veteran manager believes that Gibson might have to quit Old Trafford to become a regular in his side. The suggestions earned an angry rebuke from Gibson with the midfielder unhappy that Trapattoni was advising him to leave United, bluntly stating the Italian ‘must have been having a laugh’.

As can often happen, miscommunication sometimes leads to misunderstanding when there are language difficulties leading Gibson to fire back “If Trapattoni wants me to move on from a club like Manchester United to better my game, move to somewhere like Stoke where I’ll get more games but have little chance of winning anything, then I just don’t know” Gibson told the Derry Journal. 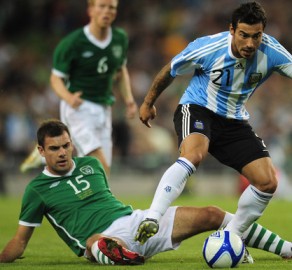 “At what club, other than Manchester United, could I go to improve my game?” he asked “to be honest, if he’s trying to say that I should move somewhere like Stoke City and change my game to winning tackles and not winning games, then he’s having a laugh. To move on from Manchester United just doesn’t make sense to me”

That sort of outburst could have led to a difficult relationship with the Ireland boss but fortunately for Gibson, Trapattoni soon moved to clear up the confusion insisting that he never suggested for Gibson to find a new club but to work harder to establish himself at United and putting greater demands on his own performances.

Trapattoni told Sky Sports “What I told him was that for him, the action is not finished when he does not have the ball. I told him that in this great United team it is not easy to play in this situation because he plays with ten great players and when these great players have the ball they play” Trapattoni explained “he must ask for the ball, he must want the ball, that is important. He has to work to get the ball, he has fantastic vision and he has a good personality with the ball.”

Incidents such as this are not unusual when managers and players have difficulty expressing themselves in a foreign language but there may be a simple solution in Gibson’s case. Getting a few tips in the Italian language from team mate Federico Macheda over a glass of Chianti will be a pleasant way for both to spend a few hours.

Will Gibson be better off going  on a short term loan?