In a week when Manchester United begins another Champions League campaign, we should remember one of the most blinkered decisions ever taken in the history of English football. When Chelsea won their first ever League title in 1955 they were forced to withdraw from the inaugural European Cup competition by the then Football League secretary Alan Hardaker who feared that the new competition would create too much fixture congestion. That shameful decision was not surprising because the British had a history of being suspicious of international football as shown by the fact that none of the home teams entered the World Cup until 20 years after its inception.

Chelsea meekly bowed to those demands but when United won the title the following year, manager Matt Busby was determined to accept the invitation to compete in the second tournament. Busby had the foresight to see that the European Cup was the future of football and pressured the Football Association into backing his desire to participate in the fledgling competition. The legendary manager had no doubt that participation would be of great economic benefit to his club and more importantly, increase the football education of his players.

Manchester United’s debut took place in Brussels on September 12th 1956 against Anderlecht. Goals from Denis Viollet and Tommy Taylor following a missed penalty from the Belgians meant that United took a two goal lead back to Manchester and the first ever European Cup game to be played on English soil. With floodlights yet to be installed at Old Trafford, United’s first home game in Europe was played at Maine Road, home of their rivals Manchester City. 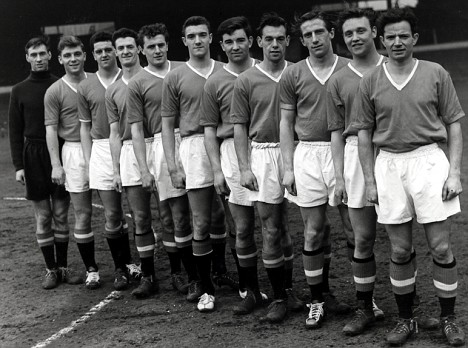 That night, the Busby Babes issued a declaration of intent as they steamrollered the champions of Belgium 10-0. ‘The Times’ reported that “It would be easy to go into raptures over such an exhibition. The accuracy, artistry, pace and devastating finish of the young Manchester United side whose average age is 22 would have pulverised any other team in the British Isles and, surely, most on the continent also. With United having gone 23 league matches without defeat and with Anderlecht having been so unceremoniously thrashed, there was no doubt in England as to who the main threat to Real Madrid was going to be.”

Details of those two historic matches are

United went on to defeat West German champions Borussia Dortmund 3-2 at Maine Road in the second round before holding on to a scoreless draw in Dortmund to progress to the quarter final but elimination by Spanish champions Athletico Bilbao looked imminent after going down 3-5 in Spain. United were determined to survive however and on February 6, 1957, precisely 12 months before the Munich air crash one year later, they staged a sensational 3-0 recovery at Maine Road in front of 70,000 breathless fans to set up a semi final showdown with holders Real Madrid.

Five chartered United flights went to Madrid for the first leg and the fans were treated to a display of outstanding football – even though it was from the home side. Alfredo Di Stefano was at his absolute best displaying intimate ball control, outstanding vision and incredible stamina. For an hour, the Real pegged United back as wave after wave of Di Stefano inspired attacks drove towards goal but Roger Byrne, Jackie Blanchflower and Ray Wood kept them at bay while Denis Viollett, John Berry and David Pegg were able to make enough sweeping raids into the other half to keep Real’s defenders on their toes.

The breakthrough finally arrived for Madrid as Hector Rial’s diving header from a Francisco Gento cross opened the scoring. Fifteen minutes later Di Stefano got the goal his performance had deserved and it was 2-0. The cheering crowd made the stadium shake with emotion as they waved their white handkerchiefs in celebration but it was United who seemed galvanised by the raucous atmosphere.

They went forward in search of a goal and after two near misses, Tommy Taylor headed home an apparently vital goal after 82 minutes. If things had stayed like that, United could justifiably have claimed the upper hand in the contest but Real were destined to have the last word. In the dying moments, Raymond Kopa flicked the ball through to Enrique Mateos who shot home to give Real a decisive 3-1 win.

By the time United played its first ever European Cup game at Old Trafford in front of 65,000 fans under the newly installed floodlights on April 25, 1957, both sides had won their respective league championships. There were confident noises coming from the United camp beforehand but Real soon took control. Di Stefano once more who opened up the home defence after 25 minutes with a brilliant long back heeled pass to Kopa who darted in and flicked the ball past Wood. Real produced a passing move of great pace to release Gento down the left wing five minutes later and his cross was touched home by Rial to effectively end the contest. United did fight back to retrieve a 2-2 draw on the night but Real had proved their mastery and England had been shown that its teams were not the dominant force that they had assumed they were.

That initial adventure into Europe had come to an end but Busby and Manchester United had no regrets for this was only the first step. The heaviest price was to be paid twelve months later, the long awaited reward was still more than a decade away.

Has anyone  done more for English football than Sir Matt Busby?