Tuesday nights European Champions League first round clash with Glasgow Rangers at Old Trafford is the second so called ‘Battle of Britain’ in the last seven years. The two sides met at Ibrox on October22, 2003 where United took the three points with a Phil Neville goal after just five minutes. The English champions did not have everything their own way however as Rangers threw everything at United and were considered unlucky not to at least get a share of the points.

Tuesday nights European Champions League first round clash with Glasgow Rangers at Old Trafford is the second so called ‘Battle of Britain’ in the last seven years. The two sides met at Ibrox on October22, 2003 where United took the three points with a Phil Neville goal after just five minutes. The English champions did not have everything their own way however as Rangers threw everything at United and were considered unlucky not to at least get a share of the points.

In the return leg two weeks later United made certain of topping their group with a comfortable 3-0 win from two strikes by Ruud van Nistelrooy on either side of half time after Diego Forlan had given United the lead after six minutes. While defeating Rangers in both matches did not present too many dramas on the field, the atmosphere on the terraces would have been different because there was never any love lost between the two sets of supporters.

Manchester United fans are used to the jealous loathing of  English rivals but the spite from their Rangers counterparts is still something of a mystery. Stuart Brennan from the Manchester Evening News took a look at why such rivalry existed before the first ‘Battle of Britain’ took place seven years ago. It’s doubtful if anything has changed since. Brennan starts by asking “Why do fans of the Scottish champions ‘hate Man U’ with a passion? In the duller moments of the seventies – and Lord knows, there were many – the Stretford End used to amuse itself with a little internal strife.

One section would chant ‘Celtic’ and the reply would come loud and clear ‘Rangers’. It mattered not if those two Scottish teams were not playing each other that day, it was just a bit of fun. Some fans would wear ski hats that bore the colours of United on one side, those of Celtic on the other. But others wore similar hats that were half-and-half with the blue of Rangers. Many of the latter ditched those hats when Rangers came to town for a ‘friendly’ match in 1974 – the violence was the worst Old Trafford had ever seen.

United’s following were hardly angelic in those dark days but the scenes on the terraces that night were truly shocking. United are a club that tends to inspire dislike, some of it bordering on pathological, but many Reds are genuinely puzzled as to why a Scottish club, with no history of playing the Reds in meaningful matches, should jump on that particular bandwagon. One reason, of course, is United’s long history of association with Ireland.

They were the first English side to sign an Irish professional when John Penden joined Newton Heath. By then, a large section of their support was drawn from Manchester’s large Irish community, football was something that gave them a common bond with the indigenous people, a bond formed on the terraces. That was underlined by the fact that, when they changed their name in 1902, they very nearly became Manchester Celtic.

The Irish link grew through the ages, fuelled by the fact that United tapped into the raw sporting talent of the Irish Republic from Johnny Carey and Billy Whelan in the 1950s through to Johnny Giles, Shay Brennan, Noel Cantwell, Gerry Daly and then on to Frank Stapleton, Kevin Moran, Paul McGrath, Denis Irwin and Roy Keane. In the fifties, United were perceived as Manchester’s ‘Catholic’ club, just as Celtic were, indisputably, in Glasgow. 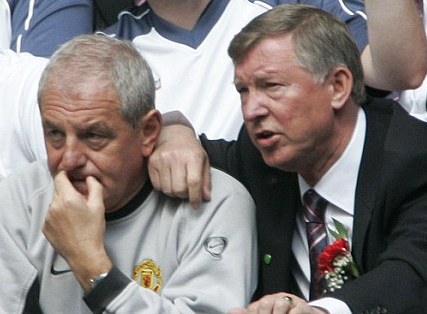 Matt Busby was a Scotsman of Irish descent, his influential assistant Jimmy Murphy was from Kilkenny and United’s scouting network included a large number of football mad priests, in Britain and Ireland, who would proffer the best talents from their church teams for the club’s perusal. Some of Manchester’s Protestant footballers complained that their denomination was working against them in their bid for the first team. (Pic – When Walter Smith and Sir Alex were on the same side)

It was a complaint that held no water when a young Northern Ireland Protestant boy called George Best was introduced into the team in 1963. United became huge in Ireland in the sixties, partly because of Best, partly because of the wave of sympathy from the Munich air crash, and partly because they were such a good, watchable team, something the Irish did not have.

That link continues to this day. United, like Celtic, have a huge fan base in the Republic, while Rangers have big support among Northern Ireland’s Protestant community. Any lingering notion that United were a ‘Catholic’ club was destroyed from the sixties onwards as Northern Ireland Protestants like Best, Jimmy Nicholl and Norman Whiteside claimed regular places. But many fans retain an affinity for Celtic, and the friendly links between United and Glasgow’s ‘other’ club are another reason that Rangers are not too fond of the Reds.

United have benefited from that link immeasurably – Pat Crerand, Lou Macari and Brian McClair all made the trip South and left indelible marks on United’s history. Of course that was strictly business but to Rangers fans it was another reason to resent United. When Celtic were forced to replay their 1984 Cup Winners’ Cup clash with Rapid Vienna outside Scotland due to a crowd incident at Parkhead, they turned to United. By contrast with Rangers‘ visit 10 years earlier, the atmosphere was cordial as tens of thousands of Celtic fans descended on Manchester and mingled freely with the locals.

At the Old Firm derby earlier this month, a flag reading ‘MUFC – Aberdeen Reds’ appeared among the green and white at the Celtic end of the ground, confirming the Celtic links in the eyes of the Rangers faithful. United are clearly no longer a ‘Catholic’ club, if they were in the first place, and the fact that their most successful manager of all time is a Glaswegian Protestant, born in the shadow of Ibrox and a Rangers nut as a boy, emphasises the point. But therein lies another sub plot.

Ferguson realised a boyhood ambition by playing for Rangers for two years in the sixties but left under a cloud. There are claims that he was forced out for marrying a Catholic girl, claims that are strongly denied by Rangers fans to this day. They point out that he was picked to play in the Scottish Cup final even when the club knew of his relationship with the girl – now his wife Cathy. Whatever the reason, Fergie has described the way he left Rangers, after being demoted to third team football by manager Davie White, as the most painful moment in his 40 years in football, as player and manager.

One Rangers fanzine has accused Fergie of fostering bad blood between Rangers and Aberdeen when he was in charge at Pittodrie. They say that his spell in charge of the Dons coincided with clashes on the field and off it and an unpleasant relationship persists to this day. He now confirms he has no allegiance to Rangers, another sin in the eyes of the Ibrox fans. There will be no warm homecoming for Ferguson. He will love it.

Is the rivalry between the two sets of fans still as fierce today?

Written by Frank Scicluna
This book asks “Why is football so damn popular?”
How United dragged English football into Europe