Ask any Manchester United or Liverpool fan what the first game they look for when a new season’s fixture list is released and you can bet with absolute certainty that it will be the home and away clashes between the two clubs. The intense rivalry between them even overshadows the local derbies against Everton and Manchester City which makes this Sunday’s meeting at Old Trafford one of the most eagerly awaited matches of the season.

It has not always been that way however, managers Sir Matt Busby and Bill Shankly who fifty years ago laid most of the groundwork for the two clubs to become what they are today were the best of friends. In fact Shankly used to visit Manchester every week for a chat with Busby and whenever the two teams met, the players would always have a few pints together afterwards. 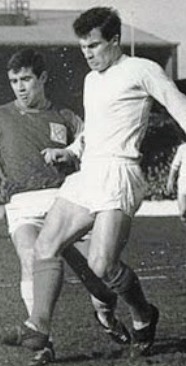 In April 1964 the two legends were involved in the transfer of the last player who moved directly between the two clubs when Shankly bid £25,000 for  United midfielder Phil Chisnall, Busby accepted the offer and the deal was completed without the slightest hint of controversy. It’s almost difficult to believe that 46 years later, Chisnall remains the last player to make such a move. The bitter rivalry that developed over the following decades made the idea of doing business unpalatable for both sets of fans.

The now 67 year old Chisnall remembers that “It was unusual to go from United to Liverpool back then, but there wasn’t a big deal made of it” he said “Liverpool had only been in the First Division for two years before they won the league in 1964. They were only just establishing themselves in the top division and the rivalry between United and Liverpool fans wasn’t as strong then as it is now. Liverpool’s real rivals were Everton, while United’s were Man City.”

“The only person who was bothered was the missus” he recalled “I told her I was going to play for Liverpool and it meant she had to take all the curtains down, pack up and move down the East Lancs Road. She wasn’t too pleased. No one else said much, even though I was moving between two big teams. Back then it was just a footballer moving from one club to another.”

“I was able  go back to Old Trafford and play for Liverpool. I can’t remember getting any stick because it wasn’t like that back then. When I was playing you enjoyed it and if you lost to a good side you accepted defeat. The game wasn’t as intense in those days and there wasn’t that mentality of win at all costs.”

Chisnall is still not completely certain how the transfer came about “I played for England Under 23s against Germany at Anfield and we won 4-2. I’m not sure whether Shankly was there but it was just before Liverpool came in for me. United finished second in 1964 and I remember Busby telling me Liverpool had made a bid. He said that I didn’t have to go but at the time Liverpool were top of the league on their way to winning it and United were second.”

He remembers that he did not need a lot of convincing “I was 21, Liverpool had won the league and were a great club. It was a vibrant place with the Beatles making it big and Shankly reviving Liverpool FC so I decided to go for it. The way I looked at it was that Liverpool was just down the road and I was about to get married. There was a big rivalry in those days in football terms but there was no battling in the streets.”

That move to Liverpool was not as successful as Chisnall would have hoped. He only managed eight appearances in three years at Anfield “Things didn’t really work out for me but I didn’t regret joining Liverpool” he said “it was just circumstances really, I didn’t hit it off. It was a great side with players like Ian St John, Ian Callaghan, Peter Thompson, Roger Hunt, Willie Stevenson, Gordon Milne and Tommy Smith so it was always going to be tough to get into the side.”

“In the space of a year I played under Matt Busby, Bill Shankly and Alf Ramsey, who was manager of England Under-23s at the time. The three of them were all great managers. These days I live close to Old Trafford in Urmston and I like to see both United and Liverpool do well. I really don’t favour one of them above the other. Both clubs have had spells when they have dominated and these things come full circle. I’m sure Liverpool will come back strong. I just feel privileged to have represented two great clubs from two great cities” reflected a man born and raised in the Davyhulme area of Manchester and is now living only a mile from his birthplace.

Every time the question of  “Who was the last footballer to be transferred directly between Manchester United and Liverpool?” is asked, the answer has been the same for over 45 years. It makes you wonder if the day will ever come when it will finally be somebody other than Phil Chisnall.

Should there be any objections to players being transferred between the two clubs?