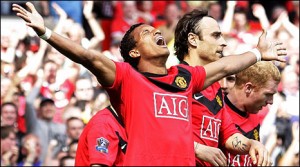 It was gut wrenching to see Antonio Valencia sustain that horrific injury on Tuesday night against Rangers, not just from a literal visual point of view, but because of the knowledge that the man must currently be going through immense mental and physical anguish and pain, the likes of which very few of us can relate to. Once that thought has sunk in, there is then the realisation that we are now without our first-choice right winger, and a brilliant one at that, for a significant part of the remaining season.

But let’s not ignore the elephant in the room here because, whilst it may be distasteful to try and take any positives from Tony V’s injury, there’s no denying that deep down inside, Nani knows that he will now get the chance to start week-in-week-out on his favoured wing, giving himself even more opportunity to hit the kind of consistent form that he and all United fans know that he is capable of.

There’s no denying that Valencia is a great player, his ability to beat the full-back and whip in a superb cross are vital attributes for being an effective winger, especially when playing as part of a 4-4-2 (which seems to be United’s default formation at the moment). And with full-backs now getting forward so much more in the modern game, his defensive ability, which is vastly underrated and underappreciated by many, only enhances his case further for starting most matches.

But he has his limitations, with the glaring one being that he is particularly one footed and therefore not positionally versatile, meaning he can only play on the right-wing. The effect of this is that, as Zonal Marking described in an article of theirs back in March, with Valencia on the pitch United become a tad predictable, with a tendency to attack primarily down the right hand side. 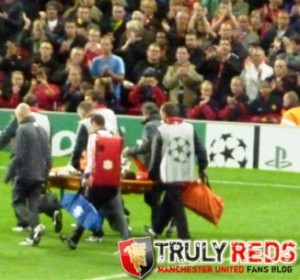 This is quite different from the Champions League and Premiership winning side of 2008, the formation of which Jonathan Wilson describes in his book, “Inverting The Pyramid: The History Of Football Tactics” as being a strikerless 4-6-0, a system Ferguson was inspired to pursue after seeing Luciano Spalletti apply it to such good effect at Roma, despite our 7-1 demolition of them in the Champions League. To quote the book:

“With Cristiano Ronaldo, Wayne Rooney, Carlos Tevez and Ryan Giggs or Nani slung in front of a holding pair of two from Owen Hargreaves, Michael Carrick, Anderson and Paul Scholes, United regularly had no obvious front-man, with the front four taking it in turns to become the de facto striker, which helps explain Ronaldo’s remarkable goals return. It is a system that requires much work to develop a mutual understanding …but when it does click it can produce exhilarating football”.

As well as debunking the myth that Ferguson is not as tactically aware as some of his peers and proving that he is also a master of squad rotation, it meant that United became incredibly unpredictable and difficult to defend against. Opposition teams could watch as many videos of United as they wanted prior to a match against them, all they would learn is that they were probably going to get a spanking courtesy of Cristiano Ronaldo in their next game.

But a problem for United now is that our two best wingers, Valencia and Nani, cannot interchange at will like the team of 2 years ago, and Nani has had to take one for the team and play on his weaker side in order to compensate for Valencia’s lack of versatility. But with Valencia now sidelined for many months, Nani is going to be able to play in his favourite position, which may also mean we’ll see less of the cut-in-and-shoot-on-the-right-foot policy of Nani’s, that at times is as predictable as a Paul Scholes lunge-and-get-booked combo.

Of course this raises the question of who to start on the left. Gabriel Obertan, who showed some promise last season, springs to mind, as does Park. Whilst Obertan possesses similar qualities to Valencia, an advantage of having Nani on the left with his tendency to cut in is that it allows Evra to overlap in a way similar to Ashley Cole or Maicon. With Obertan preferring to stay wide and high up the pitch, these ventures from Evra would have to be curtailed.

Park, who we all know could probably run to away matches instead of getting the coach and still get there first, isn’t your first choice as an out-and-out winger though. His superb defensive ability would allow Evra to overlap as much as he wants and effectively operate as a winger, but when playing in a 4-4-2 his lack of creativity can at times be infuriating. As watching any United away match in Europe shows, Park is best for us as part of a midfield three, perhaps alongside Fletcher and Scholes.

There’s also the problem of Nani’s occasional lapses in performing his defensive duties. If you’re playing him with Rafael at right-back, this presents the opposition with a jugular to go for, as despite Rafael having amazing potential, he is still only young and has a tendency to lose his head against dangerous players (see Ronaldinho).

We could also revert to a 4-3-3-/4-5-1, which is what I’m hoping we’ll go with for the Liverpool match on Sunday. With Hodgson’s preference for playing a 4-4-2 with two solid banks of four, a 4-3-3/4-5-1 would be the natural choice (see England vs Germany for that one). A Rooney-Berbatov-Nani front three perhaps? In the games he’s played in this season Nani has sometimes drifted in, playing as the spearhead for brief periods in games, with Rooney moving to the left and Berbatov dropping back as a “false nine”. Whilst everyone wants to see Rooney being more greedy and playing as a “proper striker” so he can bang some goals in, there’s no doubting that his versatility and creative vision are what make him the valuable player he is.

So get well Antonio Valencia, you’re a great player and will be sorely missed, and I’m sure every United fan wishes you a speedy recovery. But suffice to say, Nani has just been transferred into my fantasy football team!