Securing three points is always a joyous occasion for a Manchester United fan, achieving it the way it was on Sunday gives an incredible buzz, but doing it against your biggest rivals is simply euphoric! And seeing your opponents struggling one point away from the danger zone is the icing on the cake. It’s a well known fact that the start of a new season sets the tone for the rest of the campaign and five points in five matches for Liverpool equates to 38 out of 38 – the same number that Sheffield United got relegated with just three years ago. But surely,  it’s far too early in the season for Anfield fans to be really concerned – or is it?

Not that we should be gloating about anyones misfortune of course but hey, someone has to suffer the humiliation of being relegated. Perhaps the biggest satisfaction of all was witnessing the man that the Anfield mob took so much pleasure in deriding as ‘Berbaflop’, ramming that insult down their throat as he stole the show with a virtuoso display that left Liverpool shattered and languishing near the foot of the table in 16th position after five games. 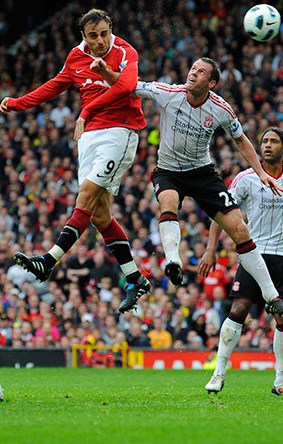 That was as sweet as it gets for someone who has never been backward in telling anyone prepared to listen that the Bulgarian maestro was sheer class ever since Sir Alex Ferguson paid a record transfer fee to lure him from Tottenham. To be fair, it has not only been Liverpool fans who have been so derogatory to a player that no sane Premier League manager would ever refuse to have in his team. His many critics have even included a section of United fans who have been blind to Berbatovs huge football talent for the last two years.

His two strikes in the first hour confirmed United’s total domination of their rivals before allowing them a sniff of survival but that was only giving their opponents a false glimmer of hope. Liverpool somehow drew level from two Steven Gerrard set pieces only for Berbatov to turn their dreams into an Old Trafford nightmare by outmaneuvering Jamie Carragher inside the box and guide his header past keeper Pepe Reina for a sensational winner.

Ferguson had been heavily criticised earlier in the week for not including Berbatov in the squad that was unable to crack a resolute Rangers defence in the Champions League but the wily old fox may have known exactly what he was doing. Had Sir Alex taken the risk of Berbatov getting the slightest of knocks in that game, he may not have possessed the same razor sharp reflexes which proved so crucial on Sunday in what was the most critical clash of the season so far.

So what does such an afternoon mean for the rest of the season? Plenty. It has become painfully obvious that Wayne Rooney is going through a difficult period. The man has not been the same dynamic goalscorer that he was before his injury in Munich last season and personal problems are not going to help him overcome his mini crisis. Not just yet anyway. 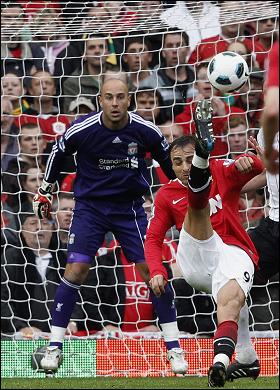 Berbatov has shown however that what may be lost on the swing can be gained on the roundabout and is more than capable of stepping up to the plate. The ovation he received from the 75,000 fans packed into Old Trafford as he was replaced after 88 minutes included, to their credit, many of the Liverpool travelling support and must have been enormously uplifting for the humble Bulgarian.

The last time a hat trick was scored by a Manchester United player against Liverpool at Old Trafford was when Joe Spence banged three home in 1928 as part of a 6-1 victory. That’s 82 years ago so just try and imagine such a time span, it’s an entire lifetime!

Team mate Patrice Evra was not at all surprised by the brilliance of Berbatov’s second goal and commented that its a simple routine for the Bulgarian to show such touches at training everyday.  “Too many touches like this at training you know, I am not surprised because Dimitar is the kind of player who can score many goals like this”

Ferguson could not hide his delight after the game “We are probably now beginning to see Dimitar believe in himself. There was a lot of criticism of him last season, but it happens when players sign for United for a lot of money and they aren’t scoring hat tricks in every game. That’s the way of the world with some players who come here but this season he has started in the right fashion. His training has been good, he was good on the pre season tour and he has carried it on. There has never been any doubt about his quality and we have seen it again today” he said.

Getting the better of Liverpool means a hell of a lot to Sir Alex “The build up to these games is such that if one doesn’t win it’s a catastrophe” he continued “for Liverpool this is a catastrophe. People are now talking about Liverpool not winning and it would be the same if we hadn’t. That’s the nature of these games.”

Catastrophic may be too strong a word at this early stage of the season but Ferguson saw the lack of quality in this Liverpool side first hand. Their position on the table does not sit well with the Anfield faithful, their major concern being that should some of their key players remain unsettled they may just have to get used to it. Even the dreaded ‘R’ word could start to be heard in conjunction with their beloved team more and more frequently as the season develops.

Will the return of Ferdinand be enough to correct the flaws in United’s defence?