While Manchester United will understandably be lamenting the absence of Ryan Giggs in Valencia on Wednesday night, one of the most disappointed will be Spain World Cup winner Juan Mata. The Valencia winger has recently admitted in an interview that he used to idolise  Giggs when he was young. Sadly for Mata, Giggs was left behind at Old Trafford because of a hamstring injury picked up at Bolton on the weekend. The omission has left Mata disappointed “It is such a shame that Giggs won’t be playing because I would have loved to swap shirts with him” he said “I used to talk about Giggs a lot, because he was left footed like me and I used to watch his movements.”

Mata was a starry eyed 13 year old when Giggs played for United at the Mestalla in a scoreless draw nine years ago.  “That year I saw many games in the Champions League when Hector Cuper’s Valencia reached the final in Milan and remember talking a lot with my friends in class about Giggs” he remembers.

The Welshman has achieved legendary status with United following the wingers’ loyalty to the club over the years. Giggs has made more than 20 league appearances each season for the past two decades which is a testament to his consistency. The 35 year old veteran is the most decorated player in English football with 11 league titles and 2 Champions League trophies among a large haul of silverware. 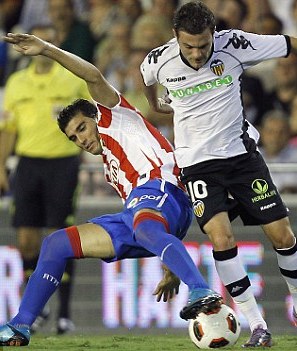 Mata went on to discuss why the club has been performing really well despite the sale of their two best players David Villa and David Silva. “It is clear that Villa and Silva were important to us, but the club has done well this summer and has been successful with their signings” he explained “the squad is very balanced and in the dressing room we are very confident of our chances. Valencia are going well.”

Mata himself is a former Real Madrid player who spent four years at the Bernabeau academy but the club deemed the winger surplus to requirements and was promptly released. Valencia was quick to realise his potential and signed the nineteen year old on a free transfer at the start of the 2007-08 season. Mata’s stocks have been rising ever since as the youngster has won the World Cup with Spain at a tender age of 22. Mata is an integral part of the Valencia squad scoring an impressive 9 times.

Mata will line up against United at the Mestalla and while Giggs will not be on the pitch with him, the Spain international will look forward to catching up with his idol when the two clubs meet at Old Trafford in early December for what could be a decisive 90 minutes.

Will defeat in Valencia be fatal for United’s qualifying chances?