A strong argument can be mounted that a horrendous injury list during the last campaign made the difference between Manchester United winning a fourth successive Premier League title and narrowly missing out by a mere point. Without wishing to give an impression that everything is all doom and gloom, signs are beginning to emerge that history may be about to repeat itself. The only exception being the unexpected early  return of England international midfielder Michael Carrick.

United flew out to Valencia on Tuesday morning WITHOUT key players Wayne Rooney, Ryan Giggs, Paul Scholes and of course Antonio Valencia amongst the travelling party.  The only welcome news for manager Sir Alex Ferguson is that midfielder Michael Carrick is fully fit and could make his comeback at the Mestalla. The England international has not started a game for United since the Community Shield in early August and although he did join up with the national squad for their opening Euro 2012 qualifiers, he was then sent for treatment to try and ease the discomfort from an Achilles problem.

Ferguson reported on Friday that Carrick had returned to training and was on the flight to Spain. Rio Ferdinand was also on the flight and Sir Alex will wait until Wednesday to decide whether or not to include him in the starting eleven. The full squad is Goalkeepers: Van der Sar, Kuszczak, Amos. Defenders: Smalling, Ferdinand, Vidic, Evra, O’Shea, Evans, Rafael, Brown. Midfielders: Anderson, Bebe, Nani, Carrick, Gibson, Fletcher, Park. Forwards: Hernandez, Berbatov, Macheda, Owen. 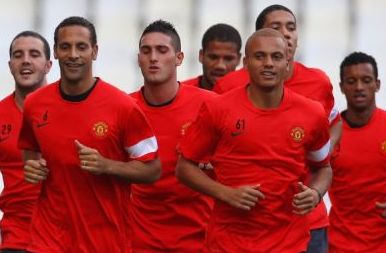 (Pic on left – United at their training session in Valencia)

Rooney’s ankle problem has given Ferguson a reason to leave his out of form striker at home which will allow the 24 year old a chance to get his mind right following damaging allegations about his private life. United have not given any firm indication of how long Rooney will be out of action but Scholes is expected to be unavailable for 2 weeks with a calf problem while Giggs could be out for a similar period because of a damaged hamstring.

It could be argued Rooney’s struggle for form has been a contributing factor to a stop start opening that has seen United register four draws from seven matches in all competitions. “The 0-0 draw against Rangers was a disappointing result but we have five games left to try and qualify” Ferguson admitted “we have a tough game tomorrow but that’s the great thing about the European Cup – you face the best teams in countries like Spain, Italy and Germany. That’s what makes it a fantastic tournament.”

Rooney’s absence from the team should have minimal effect on this occasion. More important is the tightening up of a defence which has conceded no fewer than nine times in six Premiership matches. It will be imperative to find a solution in Valencia if they are to avoid defeat against a side that has overcome the departures of David Villa and David Silva to become the surprise pace setters in La Liga.

“It is going to be a difficult match” midfielder Darren Fletcher conceded “people might say it’s not the same Valencia because they have lost Villa and Silva. But as we have seen at Manchester United, when you lose good players others step up to the mark and take on more responsibility. They have had a fantastic start.”

“We have picked up experience of playing in Europe and we have confidence” he continued “we know how to cope with the travel and the different styles of play. Against Spanish sides, keeping the ball is key. If you give the ball away cheaply you might not see it for a few minutes and they will punish you.”

Avoiding defeat will be the absolute minimum objective for Ferguson at the Mestalla while three points will put United back in the box seat to qualify from Group C. Once the Sunderland visit on Saturday is completed, a visit which incidentally should have always been scheduled for Sunday, a near three week spell before facing Turkey’s Bursaspor at Old Trafford will give Sir Alex and his ever lengthening list of injured players some much needed breathing space.

Will defeat at Valencia put United in an impossible position in the Champions League?