There’s no shortage of interesting football stories at the moment which is more reason to wonder why some journalists seem to home in on anything involving Wayne Rooney. Accompanying his wife Coleen to Prague for a modeling shoot before joining the England squad back home was considered big news! Was it really? Two other examples in the last few days emphasise the obsession which the media appears to have with Rooney. 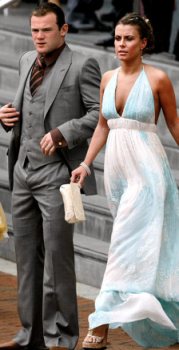 Football magazine Four Four Two has released its latest Football Rich List showing the 20 wealthiest players in British football and guess what the big story was? “Rooney’s wealth plunges by £12m” which at £25m makes him the sixth richest footballer in the country.” How many 24 year olds worth that amount of money do you know? Is it really that big a deal?

What makes the story an even bigger non event is the fact that his former United colleague David Beckham had his wealth reduced by £25m to £100m during the same period, a loss which was twice that of Rooney’s. Yet apart from a fleeting mention, it received little attention in the general media in comparison to Rooney’s financial ‘disaster’

Then we had the latest beat up in the last few hours with headlines screaming that Federico Macheda described Rooney as a “working class, vulgar chav” in an interview with Italian daily Gazzetta dello Sport. Remember that the interview was given in Kiko’s native Italian which was then translated into English.

According to The Guardian, Macheda’s exact quote was  “Rooney is a really great person, he always gives me advice but like me, he’s a bit of a coatto.” A what? One interpretation of ‘coatto’ is that it can apparently be an affectionate term used between friends but was translated by some to mean ‘chav’. Don’t be at all surprised if Kiko does not even understand what the word chav means.

But that’s all beside the point. These days you can be guaranteed that whenever Rooney’s name is involved, the media will always manage to manufacture some sort of sensational headline in order to grab a little bit of attention.

Has the media gone overboard with anything Wayne Rooney?