Clayton Blackmore retains a place in the hearts of United fans, perhaps for one reason more than any other. With only minutes left in the 1991 European Cup Winners’ Cup final, he denied Barcelona an equaliser, clearing Michael Laudrup’s effort off the line. The former Wales international rose through the club’s junior ranks to make 245 first team appearances, so his latest post as a coach to the under-15 Academy side seems highly appropriate. In a report by Tony Bugby on manutd.com Blackmore answered questions  about his successful playing career sent in by readers.

Do you enjoy coaching kids, and do you plan to manage again? (Nathan Scholes)
I have been back at United for 12 months and yes, I enjoy working with the kids. I was a youngster here and know what the lads go through. I’ve been in charge of Wales schoolboys and under-21s and I’ve managed Bangor City. Maybe I will go back into management one day, but this suits me now. 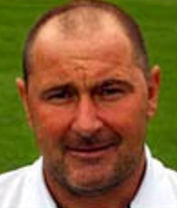 Who was the best player at United in your day? (Nutterfield)
I’ll go for Ryan Giggs, because of what he has achieved and is still doing at the age of 36. I try to judge footballers in terms of not wanting to play against them, and Ryan was always a nightmare to train or play against. He was so elusive and one of the hardest players to mark that I have ever faced.

What was playing for Sir Alex like? (Reinhard21Chris)
You certainly knew where you stood with the boss. If you played well you stayed in the team, but if you weren’t doing it you got the ‘hairdryer’ so it wouldn’t happen again. What a lot of people don’t realise is that off the field he is totally different and like a parent, a big dad, to the players.

Was being versatile a help or hindrance? (Paul Taylor)
It could work both ways. I may not have played so many games had I played in one position, yet on the other side of the coin I didn’t have a regular place. I enjoyed being versatile and the challenges of playing in different positions. I was everywhere except keeper, I think. 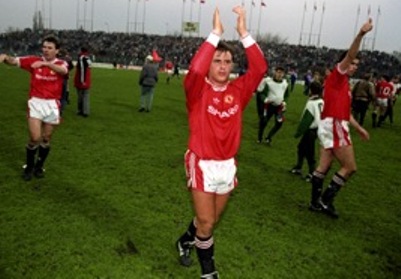 You had an explosive shot, but what was your best goal? (TimmyM)
I scored lots for the Reserves. I scored a hat-trick against Everton in a junior game and the third was an overhead kick from the edge of the box. I also remember a free-kick against Leeds and one from about 40 yards against Montpellier in the year we won the Cup Winners’ Cup.

What memories do you have of clearing Michael Laudrup’s strike? (Peter67)
I always tried to be one yard ahead of play and was giving cover to keeper Les Sealey, so I was in the right place. It was one of the biggest moments of my career and as vital as any goal.

What was it like when United ended the 26-year wait for the league title? (Rosie Red)
It was an anti-climax as we won it due to Oldham beating Villa. I was at home watching it on TV. We had waited so long, it was a relief to finally have the monkey off our back. I went to Steve Bruce’s to celebrate. We all did!

Should United use more former players on the coaching staff?