The 2012 European Championship qualifiers on the weekend provided starkly contrasting fortunes for two of  Manchester United’s internationals. While Nani was turning on a dazzling performance in Portugals’ 3-1 home defeat of Denmark, Darren Fletcher and Scotland went down 0-1 to the Czech Republic in Prague to leave the Scots trailing in second place behind Spain in their group. They now face a crunch match with the world champions at Hampden Park on Tuesday night.

The Scotland captain was obviously disappointed that something was not salvaged on Friday night explaining that “It’s easy to say things in hindsight, games are always easy in hindsight when you don’t win the match” he said “we went there with a game plan to frustrate them and we felt we did that although they did look dangerous at set pieces and that looked the only way they could score. We spoke at half time about how we hadn’t conceded silly free kicks but you can’t control how you give away corners and ultimately that’s what cost us.” 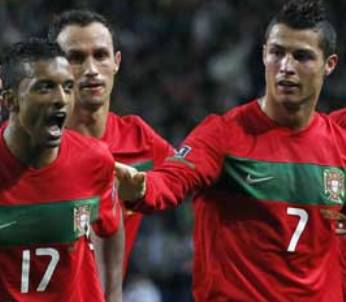 The Manchester United midfielder is hopeful that history will repeat itself at Hampden “We’ve been there before and beaten France in two games” he pointed out “don’t get me wrong, Spain are going to come to Hampden and they’re going to have a lot of possession because they’re a top quality side and they keep possession against the best teams in the world. We’ve got to use the results we had against France as inspiration for this one”

Fletcher should be OK to face the Spaniards after taking an early knock in Prague.“I couldn’t feel my ankle” he said “their lad kicked a nerve in my leg early on and my ankle and my whole foot went numb for about 25 minutes although it eventually wore off.”

Nani had a much better night in Portugal outshining Cristiano Ronaldo and scoring twice. The £80m man also got on the scoresheet but it was Nani’s goals – his second a superb effort from outside the box – that had everybody talking. It was Portugal’s first win in the qualifying stages after drawing 4-4 with unfancied Cyprus and losing 1-0 to Norway in the earlier rounds. Portugal now travel to Iceland on Tuesday where another three points should be there for the taking.

United legend Ryan Giggs has revealed that he sees potential for true greatness in Nani promising to devote his remaining days at United into turning him into the new Ronaldo and make him one of United’s all time greats. Giggs has no doubt how far the winger can go “I think Nani is ready to step up to that next level now. He has always been a match winner but he needs to do it consistently. This season he has already made seven or eight goals and scored a couple but he can do better as well and improve and there is more to come.”

“What he needs to do now is add more goals to his game” Giggs continued “he needs to score 20 goals a season and make 20 goals. If he does that, and he is capable of it, that is all you can ask from a wide player. I am obviously one of the senior players here now and I speak to the wingers all the time about positional play.”

The Welsh wizard is approaching the end of a career that has produced 11 Premier League winners medals but his contribution to a club that he joined as a young kid will hopefully continue for many years to come.

Can Nani possibly become as deadly as Ronaldo under the guidance of Giggs?