There are times when it’s impossible to find the words to explain the ‘inexplicable’ as Sir Alex Ferguson described this result after the game. This is one of them, so rather than try to look for empty words, it’s best to leave it to Sir Alex to give his thoughts on a result which still seems surreal. “It is an inexplicable result and obviously frustrating” he explained “I suppose there are two ways of looking at it. If we were in the middle of the league we could say we were still undefeated. For us it is not good enough.”

There are times when it’s impossible to find the words to explain the ‘inexplicable’ as Sir Alex Ferguson described this result after the game. This is one of them, so rather than try to look for empty words, it’s best to leave it to Sir Alex to give his thoughts on a result which still seems surreal. “It is an inexplicable result and obviously frustrating” he explained “I suppose there are two ways of looking at it. If we were in the middle of the league we could say we were still undefeated. For us it is not good enough.”

“Sometimes it is better to be one goal in front than two. You keep your focus a bit more” he continued “but what can you say about their second goal? Edwin van der Sar has probably been playing for 25 years and he was probably in primary school the last time he made a mistake like that. You have to just wipe it off the slate. It is not a defining result in terms of where the league is going to end up but we cannot keep doing that.”

A team that has built a reputation of staging famous comebacks has this season found itself on the wrong end of those same late rallies. They have tossed away two goal advantages on three occasions with Dimitar Berbatov snatching a winner against Liverpool but there was no such rescue act this time. The only slight consolation for United came later in the afternoon when leaders Chelsea also failed to take all three points at Villa Park. 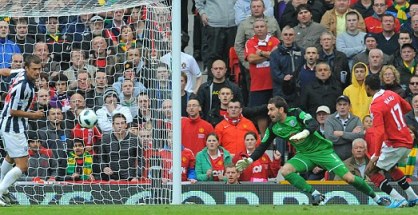 The Guardian – There is more wrong at Manchester United than the egos of Sir Alex Ferguson and his principal striker grating against each other. Squandering points after taking a lead away from home is one thing; doing it within the confines of their own fortress is quite another. Ferguson had spent the international break in the United States and had been granted a tour of the White House. His decision to drop Wayne Rooney in the wake of the striker’s criticisms of his non-selection at Sunderland and Valencia demonstrated that the United manager understands the use of naked power as well as any American president.

However, even in the Oval Office they understand there are limits to the ability of any individual to control events and when Edwin van der Sar dropped a straightforward cross in a game that the West Bromwich Albion manager, Roberto Di Matteo, described as “an afternoon of gifts”, it allowed Somen Tchoyi to wipe out what had been a two-goal lead at half time. The great stadium immediately began howling for a man who had protested that an ankle injury should not have prevented him playing in United’s previous two matches and who had suffered the consequences of rebellion. Full Report

BBC Sport – A mistake from Manchester United keeper Edwin van der Sar proved costly as his side were held to a draw by West Brom. Wayne Rooney started on the bench for United but they went 2-0 up when Javier Hernandez pounced on a parried save to slot in before Nani steered in a shot. A Nemanja Vidic header hit the Baggies post but the visitors scored when Patrice Evra diverted a Chris Brunt free-kick into his own net. Van der Sar then dropped a Brunt cross to allow Somen Tchoyi to equalise.

Rooney had come off the bench in the 71st minute and, although he went close when his goalbound shot was blocked in the West Brom goalmouth by Gabriel Tamas, he failed to help United to a win as they were held to a third consecutive Premier League draw. And, rather than the expected United bombardment late on, West Brom stifled the game in the most part and even looked capable of stealing a win in a game they were given a helping hand to turn around. Full Report

Manchester Evening Post – Wayne Rooney came off the bench but couldn’t prevent Manchester United throwing away two points against West Brom at Old Trafford. Sir Alex Ferguson’s decision to name Rooney among his substitutes looked a wise decision early on as Javier Hernandez and Nani put the Reds into an early lead. But after the break an own goal from Patrice Evra and a strike from Cameroonian Somen Tchoyi – following a mistake from goalkeeper Edwin van der Sar – levelled the scores.

Ferguson brought Rooney and Paul Scholes on with 20 minutes remaining but neither could force a breakthrough as United’s stuttering start to the season continued. The Reds remain unbeaten in the league but have drawn five games. The Reds’ title challenge is in danger of disintegrating before the onset of winter, and perhaps the biggest story was perhaps that Rooney sat through all the drama on the bench, the cover of injury he himself had removed no longer available to explain an absence that was the culmination of an awful six months. Full Report

Written by Frank Scicluna
2 comments
Are United out of the title race? Better think again!
Liverpool Red Sox debacle is a lesson for Glazers