Sir Alex Ferguson heaped praise on his injury-ravaged Manchester United team today for marking his 24th anniversary as manager with a 2-1 win over Wolves. Park Ji-sung struck the winner two minutes into injury time, just as it seemed United were about to lose more ground to Chelsea in the title race. The South Korean’s near post effort gave United their sixth successive win and they head into Wednesday’s Manchester derby at Eastlands in confident mood, even if their ranks are somewhat depleted.

“We have done really well to get a result” Ferguson admitted “you have to admire the perseverance of the team because we have done it so many times. But it was a long struggle today because we made so many changes.” Sir Alex revealed skipper Nemanja Vidic, Patrice Evra and Paul Scholes had all been suffering from a flu virus that even kept the manager away from training yesterday. It led him to take a chance on the fitness of Owen Hargreaves, which backfired badly as he lasted just five minutes on his first start since September 2008 after suffering a hamstring injury. 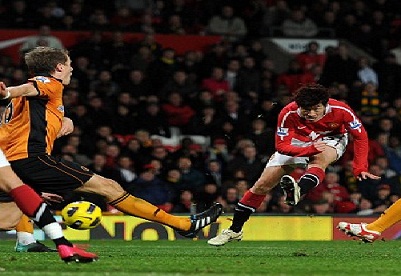 Daily Telegraph – Ji-Sung Park scored a stunning injury-time winner as Manchester United overcame the loss of Owen Hargreaves to a new injury setback by with a crucial victory against Wolverhampton Wanderers. United looked set for another costly draw after Sylvan Ebanks-Blake scored less than a minute after climbing off the Wolves bench to equalise against his former club.

Ebanks-Blake, who scored once in two Carling Cup appearances for United, netted from close range on 66 minutes to earn a point for the Molineux outfit. But Park, who scored United’s first-half opener, won it three minutes into stoppage time when he scored from 12 yards after a mazy run into the Wolves penalty area.Sir Alex Ferguson’s team now move to within two points of leaders Chelsea, who face Liverpool at Anfield on Sunday Full Report

Manchester Evening News – Park Ji-sung struck in the 94th minute to earn three points for Manchester United against Wolves on boss Sir Alex Ferguson’s 24th anniversary as Old Trafford boss. Owen Hargreaves made a surprise start for the Reds – his first in the Premier League since 2008 – but after just five minutes he limped off with what appeared to be a hamstring injury.

Park put the Reds ahead just before half-time when he converted a fine pass from Darren Fletcher. However, Wolves battled back after the break and levelled through former United striker and second-half substitute Sylvan Ebanks-Blake. However, Park struck again deep into injury time to maintain the Reds’ fine recent run. Full Report

Wolverhampton Express & Star – Wolves went within seconds of continuing their revival when they were denied a hugely deserved point. The Manchester United winner came three minutes into stoppage time. Ji-Sung Park tucked home a shot that crept just inside goalkeeper Marcus Hahnemann’s inside post in the third minute of injury-time, to cancel out a 66th equaliser from substitute Sylvan Ebanks-Blake’s third goal of the season.

It was mightily cruel on Wolves, who after shading a subdued first-half were undone by Park’s first goal on the stroke of half-time. Ebanks-Blake’s reply was Wolves’ first league goal at the Theatre of Dreams since February 1980 – and it almost clinched their first point there since later the same year. Full Report