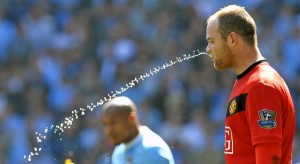 To become a football fan is to embrace the irrationality that our species is hard-wired to subsist. We see reason where there isn’t any, we see causality where there isn’t any, we make judgements based on what we already believe, we justify and rationalise those beliefs in order to reduce internal feelings of doubt and conflict. We generalise and stereotype, giving preferential treatment to those who we perceive to be members of our own group, attributing our own decisions to our prevailing rules, the decisions of outsiders to their mere attitudes and behaviours. We indulge further in groupthink and herd behaviour, recalling our decisions and opinions as being more informed than they actually were. And most importantly, what we want to see in ourselves we see in those we feel we relate to, we see what we want to see.

Which pretentiously brings me onto the fulcrum of this post, Wayne Rooney. Consider this point from Brian Phillips at The Run of Play (link here):

“…fans want players to be loyal because fans are loyal, and because we don’t want the game to be reduced to mere technique. The difference between soccer and dentistry isn’t that soccer players and dentists think about what they do in fundamentally different ways, it’s that their audiences think about what they do in fundamentally different ways. Being a fan, particularly in the hardcore club-loyalist sense, is in many ways a matter of deliberately sustaining a set of fictions. When players let us know that they see the game as a set of skills they practice for money, rather than as a midnight war of meaning waged for the soul of the universe, or whatever the guy says in the latest Adidas commercial, it becomes harder to sustain some of those fictions, so we get mad.”

Matthew Syed of The Times (link here – subscription required though) expands on this issue, proclaiming that football has become a national soap opera with a cast of millions. We have heroes and villains, traitors and conspiracy theories;

“But, most importantly of all, we have fans, the people who give the entire narrative its self-referential comedy. Fans were once thought to be the audience in this vast soap opera, but — as anyone who has followed football for more than five minutes has fathomed — they are actually part of the cast. Go to grounds up and down the country on a Saturday afternoon and you can see the largest group of extras in showbiz “getting into character” as they sidle through the turnstiles.

This is not the idiom of real life but of make-believe. It is pantomime hatred, pantomime adoration, pantomime outrage. It is the escapism of an assumed identity which permits abstraction from the ambiguities of real life and allows us to take a temporary holiday in a fairytale world of black and white, good and evil, my tribe and your tribe. How else can we explain how Rooney is hated one minute (for threatening to leave) and loved the next (for deciding to stay)?”

Related to this but more specifically focussed on the Rooney-saga, Simon Kuper of the FT (link here) also offers a brilliant take on the mindset of a football fan and the misconceptions they deduce (a brilliant article that I’d recommend reading in its entirety, as with the other referenced articles):

“This dichotomy drawn by fans and media – you’re either loyal or greedy – misunderstands how footballers think. The word footballers use to describe themselves is “professionals”. Professionals – whether they are footballers, academics or bankers – don’t choose between love and money. They pursue success in their “careers” (another favourite footballers’ word). If they can get success, then money will follow.

A footballer knows his club will dump him if he isn’t good enough, and so he will dump the club if it isn’t good enough. Rooney was good, and so he left Everton for United. Footballers regard clubs not as magical entities but as employers. Like most professionals, they will move if they can find a better job. The better job isn’t necessarily a better-paid one. Rooney could reportedly have earned more than £180,000 a week at Manchester City, and if he had put himself on the market, Real Madrid might have offered him more too. But United’s total package – the chance of prizes, the familiar surroundings, plus pay – seems to have appealed most. This is careerism rather than greed.

Pundits sometimes rhapsodise about the old days, when players often spent their entire careers at one club, but that was because clubs could then simply forbid them to move. No longer. Rooney knows that fans, managers, media and agents love him only because they need him. Their “loyalty” quickly turns to anger, intrusion, exploitation or mockery. He has no intention of being “loyal” in return. That means that sooner or later, his spat with United may well be repeated.”

And so Brian Phillips, of the aforementioned Run of Play article, talks about the same issue in an article of his at Slate.com (link here) saying that, despite Rooney’s immature childishness, what’s really annoyed the fans is the fact that Rooney’s acted like an adult (and also gone off form), choosing his career over Man United, rather than adhering to our accepted view of the eternal adolescent, a view which goes hand-in-hand with the childlike (note, not childish) mentality of the hardcore fan.

“Supporters are a forgiving group when a player is in good form. They love Rooney as a misbehaving prodigy. It’s when the goals dry up that they—and the tabloids—turn on his supposed immaturity. And there, of course, lies the irony. It’s not immaturity that’s made Rooney’s game deteriorate, it’s a string of injuries sustained while doing his job, along with a brash instinct increasingly subordinated to various positional responsibilities. Local yobs didn’t start slotting him into their assassination fantasies till he took a businesslike view of his career. Rooney’s real problem with the fans, in other words, may be the same one that’s seen him struggle on the pitch. It’s not that he’s still a child, but that he’s suddenly too grown-up.

Maybe that’s why, for all the tutting about today’s pampered players and spoiled children and the fences you built in your day, fans almost never really hate a player for acting like a reckless teenager. When they get to be kids, so do we.”

And I embrace this irrationality of the common fan, not particularly in the name of loyalty but in the name of enjoyment. Although for me football is primarily about witnessing and appreciating gifted and talented individuals perform a sport that I love playing myself, to such an extent that it can be considered “genius”, relishing in the tribal mentality makes it all that more enjoyable, although it is important to understand the concept of the “fourth wall” and how such behaviour can lead to highly irrational decision making.

And perhaps, for this reason, we should forgive Rooney rather than vilify him. The man is a wonderful footballer, no doubt about that, and as outlined by Simon Kuper and Brian Phillips above, perhaps we fans have created excessive and foolish expectations of him based on our fictionalized and irrational views and experiences that come with being a football fan.