Now here’s a man who would be welcomed back with open arms at Manchester United in some capacity. Laurent Blanc was all class and elegance on the field during his 20 year playing career which ended at Old Trafford in 2003. Sir Alex Ferguson had brought him in at the age of 35 two years earlier as a stop gap replacement for Jaap Stam and hung up his boots after making a total of 75 appearances for the club.

The 44 year old newly appointed France manager has now revealed that he would be keen on replacing Ferguson as manager at United once he retires but insists that the Scot should be the man to choose his own successor saying that “Sir Alex is the cornerstone of Manchester United. He personifies Manchester’s project, he’s got this passion.” 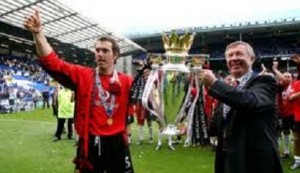 There’s a strong opinion within the game that Jose Mourinho is simply waiting in the wings for Ferguson to retire before being announced as his replacement. I’m not so sure. While his track record of winning trophies is impeccable, there are many within Old Trafford who simply see Mourinho as being the wrong man for the wrong club.

Blanc may also be considered as not having the necessary experience to take on the biggest job in British football but should he be reasonably successful at international level in the next couple of seasons he could emerge as a solid candidate. The Frenchman would certainly relish such an assignment.

The inference by Blanc that Ferguson could have the job taken away from him is a strange one indeed. Nobody in their wildest dream can ever imagine Sir Alex not walking away into the sunset at any other time than one of his own choosing.

Blanc will be in charge of France at Wembley for next week’s friendly against England then added “It would please me a lot but it would be tough to find a successor to Sir Alex. He has done it for 24 years and it will not be easy.”

Do you consider Mourinho to be the natural successor to Sir Alex?