Tonight’s Premier League derby at Eastlands will be another cacophonic affair between two clubs who first clashed as far back as 1881 In a friendly on November 12, West Gorton (St. Marks) – the forerunners of City – played at home to Newton Heath, later United. The “Heathens” won 3-0 and the affair was described, in the local press, as “a pleasant game”. The first Football League meeting was in the 1894-95 season with Newton Heath beating Manchester City 5–2 at Hyde Road. They first met in the top division in December 1906, a 3–0 City win in a First Division match for which the gate receipts exceeded £1,000, a huge amount at the time. John Ley from the Daily Telegraph gives an account of what he considers to be the Top 10 derbies between the red and blue halves of Manchester. 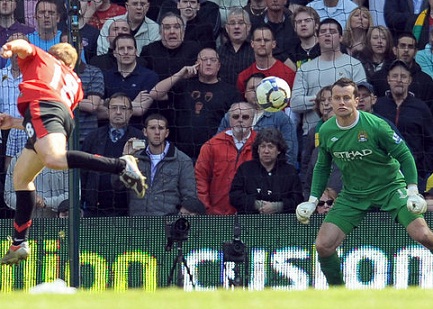 The highlights of this encounter included a 17-year-old Sammy McIlroy scoring on his United debut, a wonderful equaliser from Colin Bell, some brilliant goalkeeping from Alex Stepney and Francis Lee playing up to the crowd by accusing George Best of diving. City recovered first from 2-0 and 3-2 down.

3. Manchester United 0 Manchester City 1, Division One, April 27, 1974 – The day United were relegated, but the fact is that former favourite Denis Law’s back-heeled goal against his old side did not send United into Division Two. Birmingham’s victory that day meant that United would still have gone down, but Law’s refusal to celebrate remains an abiding memory for older fans.

4. Manchester City 5 Manchester 1, Division One, Sept 23, 1989 – United started well until the players were taken off the Maine Road pitch because of crowd trouble. When they returned after a 10-minute break, newly-promoted City took control, their march halted only by a remarkable Mark Hughes bicycle kick. Alex Ferguson later described it as his “most embarrassing defeat”.

5. Manchester City 2 Manchester United 3, Premiership, Nov 7, 1993 – United were able to restore their 11-point advantage at the top of the Premiership after going two goals down, both scored by Niall Quinn. Eric Cantona scored twice and, with three minutes left Roy Keane claimed the winner.

6. Manchester United 5 Manchester City 0, Premiership, Nov 10, 1994 – United’s best ever derby win in the Premiership came eight days after a 4-0 defeat by Barcelona – a result that prompted a massive sale of Barca shirts to the blue side on Manchester. Andrei Kanchelskis won the United fans over with a hat-trick.

7. Manchester United 1 Manchester City 1, Premier League, April 21, 2001 – The culmination of a long-standing feud between Roy Keane and Alf-Inge Haaland emerged at Old Trafford. The feud started in 1998, when United captain Keane suffered a cruciate ligament injury when clean through on goal, being chased down by Haaland (then playing for Leeds). Three years later Keane made a knee-high tackle on Haaland, was red-carded and later admitted in his autobiography that it was a premeditated attempt to injure. He later received a £150,000 fine and a five-match ban.

9. Manchester City 3 Manchester United 1, Premier League, Jan 14, 2006 – How they enjoyed this one in the blue half of the City. Not only a City win, but the sight of Cristiano Ronaldo shown a red card. Frustrated that his side were deservedly losing to goals from Trevor Sinclair and Darius Vassell, Ronaldo high-kicked into Andy Cole’s midrift and was dismissed by Steve Bennett, who had conveniently missed Stephen Jordan’s hefty assault on the Portuguese moments earlier.

10 Manchester United 4 Manchester City 3, Premier League Sep 20, 2009 – City fans must have thought they had an unlikely point in the bag when Craig Bellamy scored his second of the afternoon to make it 3-3 on 90 minutes but in what proved to be a classic derby Michael Owen demonstrated his ability to score big goals when they really count. Six minutes into extra-time the striker pounced on Giggs’s pass to send Old Trafford into ecstasy.

Will tonights meeting still be talked about in years to come?