Manchester City manager Roberto Mancini has demanded respect from Sir Alex Ferguson for the progress the Blues have made under him. The United boss continued his sniping ahead of tonight’s derby, accusing City of talking themselves up as a big club without having the trophies to back up their bold rhetoric. And a banner still hangs in the Stretford End at Old Trafford, mocking City’s ongoing failure to win a trophy, the timeline now standing at 34 years, their last silverware being the 1976 League Cup.

But Mancini, who has no doubt strengthened City and taken them to fourth in the table after just 11 months in charge, said Fergie and the rest of the Premier League owed them respect. Not just United, but all the clubs must respect the players and the history of City” said Mancini. “In the last years, City haven’t won anything, but they have a good history. We have respect for United and we want them to have it for us always. The number of trophies a team has or hasn’t won isn’t important. Respect is more important. 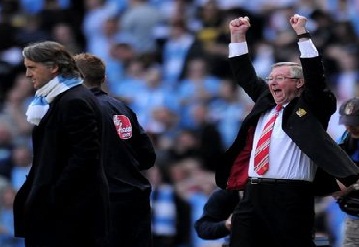 “I think they know that now we are a strong team. I think that the situation has changed. We are very respectful of United, we are respectful of Fergie because he is the top manager in the world. But we understand that we can always beat them now. That’s why think it will be a good game between two great sides.”

The three defeats City suffered last season all came courtesy of last minute United goals. Evidence, Mancini claimed, not of City’s existing shortcomings, rather of how little there now is between the two local rivals. Despite losing three out of his four meetings with United last season, Mancini claimed Fergie and his players know that City are gaining ground on their more famous neighbours and believe they will soon be their equal.

“United are a strong team who are happy to play until the last second” said Mancini “in their last game against Wolves they also won in the last minute. They are a strong team with a strong mentality and that’s why they have won a lot of trophies. But for us the important thing is that last year we always played at the same level as United. This year I think we are a different team. We may lose because in football you can always lose, but when there is a game between two top squads like this, anything can happen.”

“It’s important for us that we stay in that group in second or third position. I think Chelsea will win the title but I think all the other teams near them can try because the season is long and difficult. My opinion is that Chelsea are better than the other teams but sometimes the best team doesn’t win. Our target must be the Champions League but beyond that it depends on us. If we are near Chelsea or United in January or February then we will have a chance.”

Does Signor Mancini has any right to DEMAND ANYTHING from Ferguson or anyone else?