From a virtually unknown Mexican kid a mere six months ago to the man who everyone at Old Trafford has fallen in love with. ‘Chicharito‘  is polite, articulate, has proven to have enormous talent and obviously appreciates the opportunity offered to him by Manchester United. He is the young man that every father would welcome into his family with open arms unlike some of the spoilt characters found in so many major football clubs. Is Javier Hernandez too good to be true? In a recent interview with Inside United magazine he reflects on how his life has changed from almost giving up on football to becoming United’s first Mexican player.

How would you describe yourself to United fans as a person and a footballer?

I enjoy playing football and I always want to be a happy person. I’m quite quick and I like to score goals, though the team is always most important to me. I’m a family man, I approach everything in my life in a positive way, and I want to take full advantage of the opportunity that God has given me. That means working hard, being professional on and off the field, and enjoying myself. 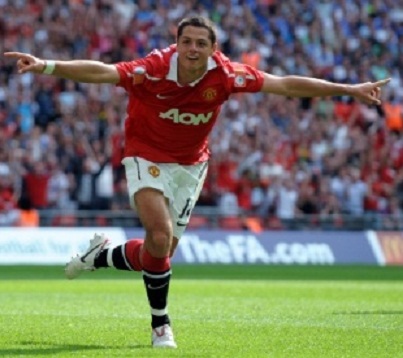 When did you first hear that United were interested in signing you?
United’s head scout Jim Lawlor spoke to me about a year ago. He said he’d been watching me play for Chivas de Guadalajara and told me United were interested, so I was very excited. Before that he had spoken to my father, and when my father told me the news I cried because I couldn’t believe it. As a kid in Mexico, my dream was to play for the best team in Mexico and then move to Europe. But to be told not just any European team, but Manchester United were interested, was unbelievable.

It’s amazing that you considered quitting football altogether 18 months ago – can you tell us about that?
I was not getting many opportunities in the Chivas first team, which led me to ask myself, “Is this the life I want to lead?” I questioned whether I was good enough to make it as a footballer. But I talked with my family, who said I needed to be patient, work hard and enjoy all the things involved in the game, not just playing in matches but going to training, resting, media work – everything that comes with this profession.

When you’re playing it’s about learning to accept the bad times as well as enjoying the good. Confidence is all part of football. Nobody here is going to play 38 great games a season, we’ll all have good and bad days. But the key when you’re not playing so well is to find out why and to work on those aspects of the game that need improvement so that you can get better day by day.

It’s been a remarkable couple of years for you since then
Yes, it’s really amazing how much my whole life has changed. I played a lot of games in Mexico, went to a World Cup and now have this incredible opportunity at United. It’s unbelievable and I’m thankful to all the people who believed in me, especially my family, without whom I would not be here.

How refreshing is that attitude compared to – hang on, there’s no need for names to be mentioned because a quick look at most clubs will soon reveal who they are. ‘Chicharito’ may be an exceptional one off, or he may eventually fall into the same trap that many others youngsters have done before him. One gets the gut feeling however that his upbringing will ensure that all future pitfalls will be avoided with the same ease that he gets past his opponents on the pitch.

Have you been surprised by Chicharito’s progress so far or are there still doubts?