Despite all the drama and negativity surrounding Manchester United this season, the 2-0 defeat of nine men Wigan at Old Trafford saw them stretching their unbeaten run to 14 matches, join the champions at the top of the table and Wayne Rooney making his long awaited comeback! Not a bad 90 minutes work which was helped by both Arsenal and Chelsea going down to their fourth defeat. The only blot for United was that they did not end up with 4 or 5 as they could, and should have done.

Sir Alex Ferguson obviously had one eye on the midweek Champions League visit to Glasgow Rangers with a starting line up which had Rooney, Paul Scholes, Ryan Giggs and Javier Hernandez on the bench while Dimitar Berbatov was given a free afternoon. 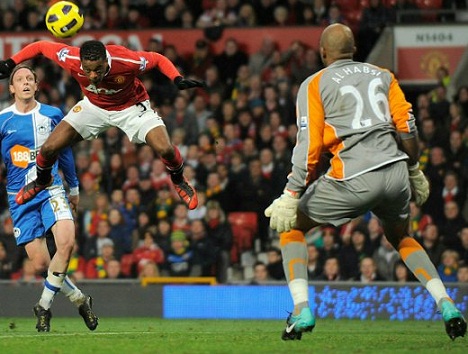 BBC Sport – Wayne Rooney returned for Manchester United as headed goals from Patrice Evra and Javier Hernandez saw them move level on points with leaders Chelsea. Evra headed home Park Ji-Sung’s cross to break the deadlock before half time after hesitancy from Ali Al Habsi. Wigan later had Antolin Alcaraz sent off for two bookable offences before Hugo Rodallega was red carded for a wild lunge on United defender Rafael. Hernandez then sealed the win when he headed in from Rafael’s centre.

It was an important victory for the Old Trafford outfit who took advantage of defeats for Premier League leaders Chelsea and second-placed Arsenal as Sir Alex Ferguson’s men moved level on points with the champions. Wigan’s record against United had been poor with Roberto Martinez’s side losing all 11 of their previous meetings. They were also beaten 5-0 twice by United last season but despite the odds being stacked against them they started brightly at Old Trafford. Full Report

Sky Sports – Wayne Rooney returned for Manchester United but could not find the net as nine-man Wigan were undone at Old Trafford. Goals in either half from Patrice Evra and substitute Javier Hernandez were enough for Sir Alex Ferguson’s side to close the gap on Chelsea, who suffered a shock defeat at Birmingham.

United went ahead on the stroke of half-time when Wigan’s defence, which had previously looked so solid, momentarily switched off and were made to pay the price.Rafael’s throw-in on the right found Park Ji-Sung, who turned and swung over a delightful cross to the far post where Evra arrived unmarked to direct his header down and back across the exposed Ali Al Habsi to find the far corner of the net. Full Report

Manchester Evening News – Manchester United defeated nine man Wigan to draw level on points with Chelsea at the top of the Premier League. Patrice Evra scored a rare goal for the Reds just before half time, and when Antolin Alcaraz and Hugo Rodallega were sent off within three minutes of each other around the hour mark Wigan’s task became almost impossible. Substitute Javier Hernandez sealed the win with his seventh United goal after 77 minutes with Chelsea now top of the table on goal difference only after their surprise defeat at Birmingham.

And with Arsenal losing to Tottenham in the early kick-off, it was a profitable afternoon’s work for the Reds. United striker Wayne Rooney made his comeback from an ankle injury, coming off the bench after 56 minutes. Roberto Martinez’s Wigan side had started well, showing from the start however that they were not going to lie down and be rolled over. Full Report