A comfortable home win for Man United against Wigan on Saturday, but yet again there’s a feeling of frustration tainting the victory in that United weren’t able to create more clear-cut chances and turn domination of possession into goals.

As Sir Alex stated himself in his post-match interview, “… we had a lot of the ball without doing anything with it. We seem to be playing our best football in the final 20 minutes. We need more quickness in our play, especially in the first half.”

To be honest you’d have expected us to have played our best football in the last 20 minutes considering Wigan’s second red card came in the 61st minute. Following Rodallega’s sending off Wigan decided to put eight men behind the ball in the middle of the park, perhaps in the hope that they could hold out for the last half an hour and sneak a goal on the counter, but it’s interesting to see how United responded to this good fortune.

The chalkboard below on the left shows all passes made by United up until the second sending off, whereas the one on the right shows all passes made by United after the second sending off. Clearly there was less passing around in our own half and more of an attempt to get forward and put some crosses into the box following Rodallega’s dismissal, which would have been made easier by Wigan’s inability to press with 9 men. Football Tactics 101, if the opposition lose a man, spread the play, look for gaps, get the opposition chasing and tire them out. 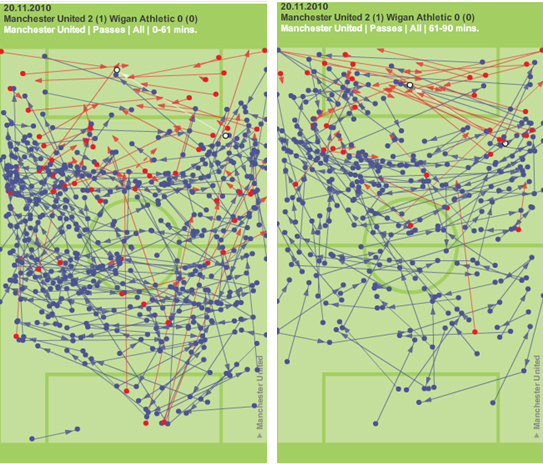 And one man that clearly benefited from Rodallega’s recklessness was Rafael. With Wigan often opting for a compact unit of two lines of four in the centre of the park when defending, Rafael was free to get forward down the right to put in some crosses, claiming an assist for himself after receiving the ball from a cleared corner unmarked. 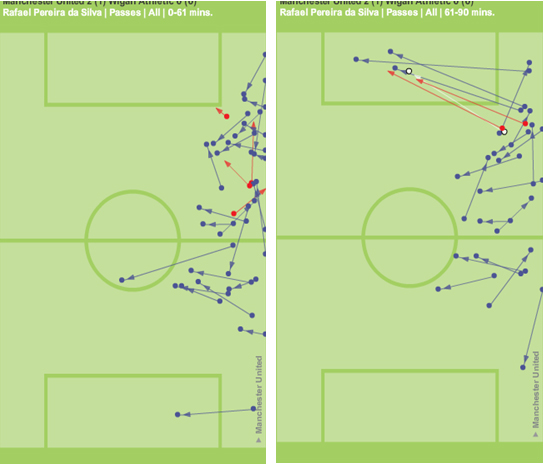 The same can be said for Nani. Rather than having to track opposition wingers and drop deep to get the ball, he was able to venture further up the pitch and look to receive the ball in the final third so he could whip in some crosses as well. 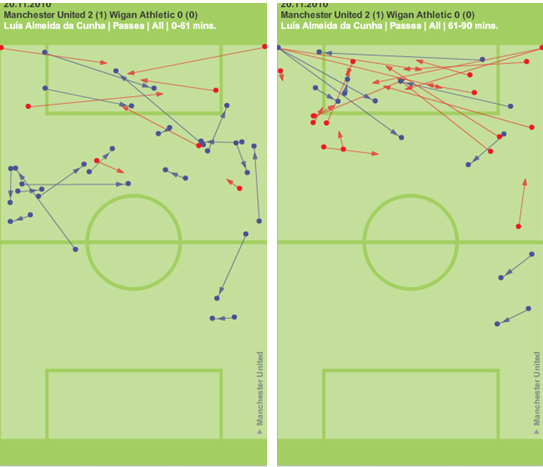 Nemanja Vidic also proved he can do more than win headers and make tackles. The below shows how, following the second red card, he was able to push further up the field and make some superb passes to launch new attacks. And that’s right; he didn’t misplace one pass in the last half hour of the game (and only three in the whole ninety minutes). 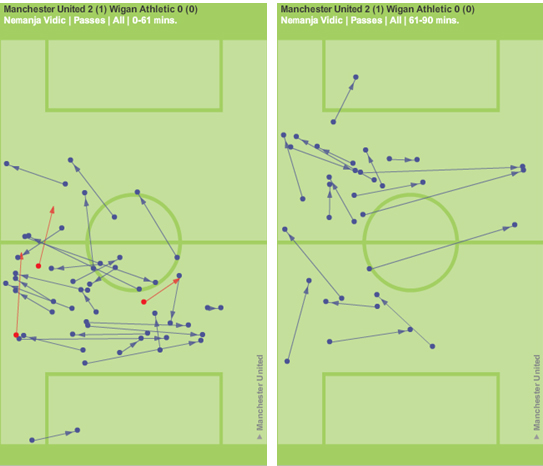 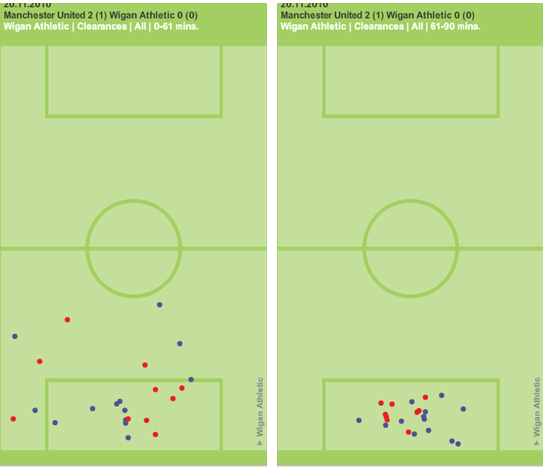 The below chalkboards show the passing patterns of, from left to right, Paul Scholes, Michael Carrick and Rio Ferdinand from the 56th to the 65th minutes. Paul Scholes came on from the bench on the 56th minute and Carrick went off in the 65th minute. You can see why. Scholes’ introduction meant that Carrick became increasingly marginalised, with Scholes attempting nine passes in the nine minutes compared to Carrick’s four. Could this be because the players would rather have Scholes launching the attacks? Perhaps. Of Rio’s seven attempted passes, three were to Scholes and none to Carrick. 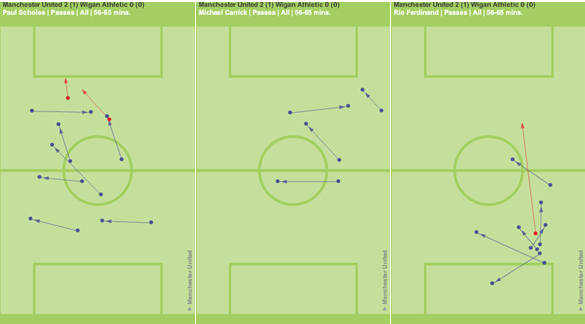 Make of the above analysis what you will (or make your own at The Guardian website – link here), it’s been difficult having not been able to watch the entirety of the game again on television, but there’s no denying that it’s often been the case this season that, following the introduction of Scholes, United’s passing and attacking has become quicker and crisper, with the right men being picked out in the right places. This isn’t to have a go at Michael Carrick, I feel that in a midfield three he could be incredibly effective, but that we’re still so reliant on a 36 year old is a big worry.

With it not being likely that a player like Scholes is going to be produced in this country for a while to come, it surely makes purchasing a player in the Schweinsteiger mould an increasingly attractive proposition.